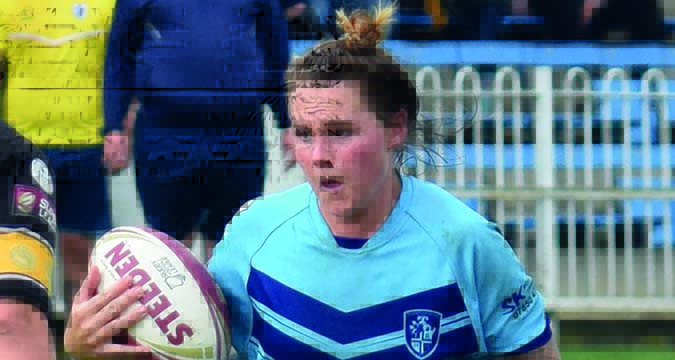 The start of the new Women’s Super League may have been delayed along with every other part of the game for now, but when it gets going again, Featherstone Rovers will be ready and carrying with them some very special inspiration.

She may no longer be able to run out onto a rugby pitch, but there is no doubting that the presence of the late Natalie Harrowell will be with Featherstone Rovers wherever they go this year.

The three-time England international tragically passed away in hospital in December, aged just 29, after contracting a serious strain of flu. She was eight weeks pregnant with her second child when she passed away, leaving her daughter Olivia, partner Phil, step-daughter Ruby and family devastated.

Her loss has been felt across the game, particularly amongst her teammates at the Rovers.

An emotional memorial game took place in pre-season which saw Featherstone take on Harrowell’s home town club West Hull, and the club also took on old rivals Bradford Bulls for the Natalie Harrowell Memorial trophy – a pre-season game that will now be an annual event to keep her memory alive.

Those games gave the squad a taste of what to expect without the bubbly forward out on the pitch with them.

But now, her teammates are looking to turn their heartbreak into success and have a year to remember in honour of the much-loved Harrowell.

“Natalie was one of the drivers of our team and a very vocal player, so it’s hard not to miss her being around,” said captain and former international skipper Andrea Dobson.

“With social media and the videos and pictures we have around of her, it still feels like she’s around, even though we know she’s not.

“It is still quite raw and there are still times of overwhelming sadness within the group.

“Everyone reacts differently to things like this and it hits everyone at different time.

“For me, if there was ever time we were up against it and facing adversity, she was always the one I would go to for support.

“Until you’re in that situation where you would normally go to her, I don’t think it feels quite real yet.

“We’re retiring the number 12 shirt but we’re still getting one printed for her. It will go with us to games and get hung up in the changing rooms where it should be.

“She was very passionate about the club and really focused to compete and we want to hold on to that.

“If the passion she had can be filtered down through the squad we’ll certainly not fall short in that regard. If we can take anything positive out of all this, then it’s that.

“Nat always wore her heart on her sleeve. She always held people accountable and she was never afraid to tell people what they needed telling. I spent a lot of time saying: “No, Natalie, don’t say that”, but she’d just say they needed to know.

“From the view of setting standards of behaviour there is a different dynamic around the team now and playing without her alongside us was hard.

“With the baby, she wouldn’t have been playing much this year, but she’d have still been around the club supporting us and keeping herself fit because she first and foremost wanted Featherstone to succeed, but she was also desperate to play for England again.

“She’ll never be forgotten and we will still talk about her, but there will be a lot left unspoken too because we don’t need to mention her all the time to know she’s there.

“We won’t forget her example and the player she was, and we’ll be trying to aspire to have a team of Natalies with the attitude she had.

“We have always been a close-knit team. There has never been drama and we all just get on really well. As tragic as it was to lose Nat, this has brought us even closer as a group.

“We have a joint goal to make the top four. We want to go one step further than last year and we want to do it for her.

“This season is definitely dedicated to Natalie.”

But it’s not just Natalie the club want to do proud in 2020, for teammate and best friend Jess Hammond, it is equally about giving those who knew and loved Natalie a reason to smile again following her tragic death.

“This year has a bigger purpose now,” said Hammond, who has taken over the role of vice-captain from Harrowell.

“She was the one that pushed us all and she wanted so much from Featherstone. All the girls have it on their minds to go out there and do exactly what she’d want us to.

“It’s been rough and we have tried to support each other and Natalie’s family. Olivia is still doing her proud and we’re trying to do as much as we can for her family.

“She was such a family person and Rugby League is the family game so it’s important we stay together and help each other through this.

“The family really want to come down and watch us this season so we want them to see us doing her proud.

“You don’t always know what you’ve got until it’s gone and you can that some of the girls have got a bit of a better drive now. They have their own purpose and they know that Nat was so close to all of them. We didn’t know the impact she was having on them until she was gone. A lot of younger girls are showing more confidence and are wanting to do her proud as well.

“Throughout the year we need to remember her words of wisdom, and we have made a logo for her that will be on our kit so we will always be wearing her on our heart.

“We don’t need any bigger motivation to do well this season than we have.

“I’ll miss Natalie every day and think of her every time I lace up my boots.”