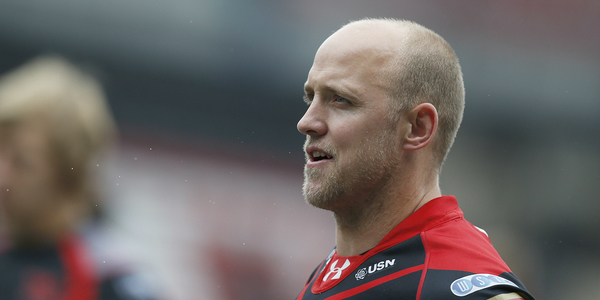 Every halfback who can pass a ball is later described as enigmatic, but Michael Dobson really came from a different mould as an organiser, who played off-the-cuff.

That paradox put him among Super League’s elite. He won the prestigious Albert Goldthorpe Medal in 2009, and everything he did was seemingly done with articulate measurement.

Not just on the field either! His composure on the field reflected an equal aura of calmness off it.
That also translated into a well-constructed career path. Dobson would first use Super League as a springboard to fulfil his NRL ambition, first with newcomers Catalans Dragons and then Wigan Warriors in 2006.

Once the games dried up at Canberra Raiders, back he then came to Hull KR midway through the 2008 campaign. Six years there saw him earn cult status at the club, but the NRL itch was to be scratched again, with his boyhood club Newcastle Knights in 2013.

First-team opportunities were again sadly an infrequent occurrence, so it was destination Super League once more with Salford Red Devils just a year later. Three seasons after that, the seesaw swung again as he returned to Australia for family reasons in 2017.

All that would seem without its twists and turns, with a career symmetry and clear direction throughout, but that would be disingenuous in describing the journey Dobson has been on. There were certainly moments of spontaneity, particularly in the early stages of his career, when he joined the Catalans in 2006, their first season under their then coach Mick Potter.

“The coach at Canberra, Matthew Elliott, called me in when I was 19 and said they needed a replacement for Stacey Jones for ten weeks in Perpignan.

“They’d watched me in the lower grades and Matt Adamson was on the coaching staff at the Catalans. He’d been at Canberra the year before and thought I could do the job.

“I’d only been to New Zealand at the time and it was a 36-hour travel for me. I stopped over in London for six hours, then got picked up in Barcelona.

“I was young and probably a bit dumb at the time, and I didn’t realise how big the situation was. So I didn’t feel the pressure too much when I was playing there.”

The pressure gauge was quickly turned up for Dobson in his next venture. He admitted the short stint at relegation-exempt Catalans felt somewhat like a holiday, but signing for Wigan Warriors until the end of the 2006 season was a career-defining move.

Wigan found themselves in unfamiliar territory at the basement of the Super League table, six points behind their nearest rivals, as work-permit issues surrounded his transfer. That was hardly surprising, given the nature of his move.

“I was literally packing my bags to come back to Australia and I had a flight booked,” he explained.

“The coach rang me up and said ‘do you fancy going to Wigan on a short-term deal?’

“Within an hour, I’d signed a deal for Wigan. That changed the course of my career and the way I thought about it. If I had gone back to Canberra without experiencing life in England, I probably wouldn’t have come back to Super League.

“We boarded a plane to England that day, to play my last game for Catalans, and then I met Maurice Lindsay in the afternoon.”

A run of ten wins from 14 games saw a young Dobson and Wigan avoid relegation, as Catalans finished bottom and Castleford were consigned to the second tier.

“I had no fear and didn’t realise the enormity of what I was doing.

“Winning most weeks was a surreal feeling and that’s probably why I came back so quickly after Canberra, because I loved everything about it.

“At the time, it was always a springboard for me then to go on and have a long career in the NRL, but I loved it so much that I kept a close eye on what was going on.”

Upon his return to UK shores mid-way through the 2008 season, Dobson raised an eyebrow or two when he joined Hull KR, who had only been promoted to the top-flight two years previously.

But the prospect of becoming a leading figure enticed him to head to East Hull, despite interest from two sides who had made the play-offs the year before, one of whom was their cross-city rivals.

“Wigan came back in and Hull FC were another,” Dobson recalls.

“Justin Morgan rang me and I was really considering going back to Wigan, but he said I could have control of the team and I definitely don’t regret that decision.

“Hull KR were a project club, I knew that straight away. Justin let me come in and run the show and it was the best decision I’ve made.”

It may not have appeared that way only seven games into proceedings, however, as the former Australian Schoolboys international was left pondering whether he had made the right move.

Following a brace of tries on debut in a 22-8 win over Harlequins, he was part of a side that suffered defeats in six successive games against St Helens (twice, including once in the Cup), Warrington Wolves, Wakefield Trinity, Bradford Bulls and Castleford Tigers.

That was until a game against Wigan, no less, on 14 July 2008, as Dobson stole the headlines with four tries and a field-goal in a virtuoso performance. He never looked back after that point, etching himself into club folklore. Reflecting on that now, however, he recalls a dark period.

“I remember against Castleford I’d had probably my worst game for Hull KR,” he said.

“I remember saying to myself ‘what have I done?’ and ‘have I made the right decision?’

“I told my wife I thought I’d made the wrong decision. I was probably trying to overplay and Justin Morgan came out and said he had faith in me and not to worry.

“The Wigan game was the springboard to get my confidence back and we went on a bit of a run. That’s when it all fell into place.

“We continued that into the next year and went on to have probably our best season, where we finished fourth and I won the Albert Goldthorpe Medal.

“The years after that were great as well. I loved the people and the club, right from Neil (Hudgell) to everyone who played there.

“I didn’t contemplate leaving until I had the opportunity to go back home and I had that desire to try and crack the NRL again. I had to make sure I gave it one last go and going back to Newcastle probably swayed it.”

A tough year at the Knights saw Dobson feature only six times for the club he supported growing up, although he was named in the 2014 NSW Cup Team of the Year for their feeder side, which reached the Grand Final.

The former Exiles representative had no hesitation then to return to Super League, fending off the option of a return to Hull, for sentimental reasons, to join Salford in 2015.

“I just couldn’t bring myself to play for Hull FC because I had that affinity with Hull KR. Salford had the ambition and I thought I could give it a really good crack. We had some very good players but we probably didn’t gel together.”

The difficulty of fusing together a consistent side was always an issue for star-studded Salford in the Koukash era, even with the likes of Kevin Locke, Rangi Chase and Adrian Morley in Dobson’s first season.

A more conservative approach was taken to recruitment in the following year, but the lasting damage had been done, as the club had to battle through the 2016 Million Pound Game in that famous nail-biter against Hull KR.

“It was horrible,” Dobson said.

“I had a lot of good friends at Hull KR, people like Dane Tilse and Terry Campese, who I was mates with from my Canberra days.

“It saved my career, but to do it at Hull KR and knowing people who worked there wasn’t an ideal situation for me.”

Following that roller-coaster of emotions, the Dobson family unit decided they would head home to Australia after the 2017 season, and an ever-changing Red Devils line-up had a point to prove.

“We got it right in my final year and we finished fourth and got to the Challenge Cup semi-finals,” Dobson recalled.

“We didn’t go for as many superstars and we went for some hard-working players.

“It felt like redemption, and it was my best year for Salford. I knew that it was going to be my last year. I had another year on my contract, but the family had decided we were going back home.”

A one-year spell at Wynnum Manly Seagulls drew Dobson’s playing career to a close, as he made the transition to an assistant coach position there.

His planned next step is to develop into a head-coaching capacity, in the future. Maybe, one day, he might just gravitate to Super League once again.