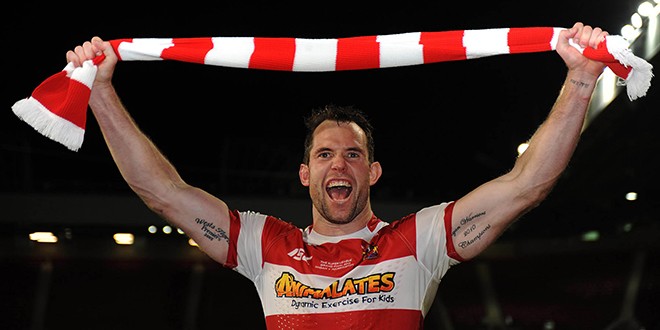 Pat Richards arrived at Wigan after having just written himself into the scriptures of NRL history, with his 2005 Grand Final try in West Tigers’ shock victory of biblical proportions over North Queensland Cowboys.

He would leave seven years later as a Wigan icon, having won two Grand Finals and Challenge Cups.
The astute goalkicker finished as Super League’s top points scorer for four consecutive seasons, between 2007 and 2010, and clocked the most tries and goals in the final year of that run.

That season saw him receive the acclamation of being named Man of Steel and joint-winner of the Albert Goldthorpe Medal, along with his team-mate Sam Tomkins, as the winger sealed his reputation as a Warriors legend.

He then returned to Wests in 2014, re-establishing himself as a clinical winger back in the NRL, before a final season with Catalans Dragons two years later brought a decorated career to a close.

That came sixteen years after he broke onto the professional scene with Parramatta Eels, making his NRL debut as an 18-year-old against Melbourne Storm on 5th May that year and immediately becoming a regular selection.

But missing the 2001 Grand Final through injury posed an early career challenge.

“I’d played the last ten games of that season and then the first ten of the season after, in 2001, and then I did my AC,” he recalls.

“I got ruled out for the rest of the season and the club went on a great run and made the Grand Final. It was tough to take as a young kid; it’s a hard thing to take at any time.

“I was just trying to establish myself and to get a really big injury like that was far from easy.”

Such lessons would be pivotal for Richards after a move to Wests Tigers in 2004, after having fallen out of favour with Eels coach Brian Smith.

The Tigers were late to the NRL party, having joined the competition in 2000 after a merger of the Balmain and Western Suburbs clubs, and they had finished with only two teams below them for three successive years.

Richards’ first campaign saw them climb to ninth, before they embarked on one the sport’s true underdog stories in the 2005 season.

Led by the cultured experience of Brett Hodgson from the back, partnered with the emerging talents of Richards, Scott Prince, Robbie Farah and Benji Marshall, Tim Sheens’ side defied the odds by winning the Grand Final.

It was a game that will be fondly remembered for two reasons, certainly for Richards himself.

Firstly, the audacious flick pass from a 19-year-old Marshall that catapulted him into stardom and then the subsequent fend from the winger and race to the line, to score one of the great NRL finals tries.

What makes Richards’ journey to the line even more impressive was his journey to starting the game.

He’d missed an NRL Grand Final in 2001, and he would stop at nothing to make sure he played a part this time around.

“The doctor, during the week said there’s a risk involved and told me that it could result in me never playing again,” Richards explains.

“I wanted to play in the Grand Final and I rolled the dice and got through it. From the ankle down I couldn’t feel a thing, I was running from memory.

“I didn’t do a hell of a lot in that game but the try was just a real surreal moment for me. I didn’t know Benji had flicked it, until two days later, I just remember getting the ball and going for the line.

“That was the way we trained, Tim had us doing all sorts like basketball passing in training and he always said try anything on the field as long as it’s practised.

“We didn’t expect to win the Grand Final, at the start of the year. It wasn’t until half-way through the year that we got the genuine belief, and we ended up winning eight in a row. We felt unbeatable.

“It was a really special end to my time there, as well, because I’d agreed to join Wigan earlier in the season so I knew it was my last game.”

It was in his move to Wigan that Richards found a resting place for the foreseeable future, having also received an offer from Huddersfield Giants to come to Super League.

In his first season in the competition, Ian Millward’s side were consigned to escaping a relegation battle, having been rooted at the foot of the table for a large section of the 2006 campaign.

Richards had to quickly review his own performances, as the bold move to Britain had offered a horizon of fresh difficulty.

“The first season was very challenging; as an overseas player you’ve got a lot of pressure to hit the ground running and rightly so, the supporters were on my back and my form was out,” he reflects.

“There was an opportunity there to knuckle down and that’s what I did. I didn’t want to come over and not succeed; that was the big driving force for me.”

Another driving force was the appointment of Brian Noble as head coach, following Millward’s sacking. Despite not being a previous goalkicker in the professional game, the departures of Michael Dobson, Danny Orr and Wayne Godwin left a void behind the tee.

Up stepped Richards to take the mantle, and he would later become one of the sport’s deadliest kickers. A 45-metre drop goal against St Helens, in 2013, and a 72-metre goal-line drop-out in the NRL, a year later, are among the incredible feats the Irish international has managed with the boot.

Pat Richards was one talented kicker 🍒⚪

One of the best Drop Goals Super League has ever seen… saved for the Derby! pic.twitter.com/ibjGMdJ7wh

“I played soccer up until I was 11 and Brett Hodgson was at Parramatta and Wests with me, so I never got the opportunity before,” he said.

“The coach of the Australia soccer team, Graham Arnold, was actually our kicking coach at Wests in 2005 and we were training kicking goals and he helped me with how to spiral the ball.

“When we didn’t have a goal-kicker at Wigan, I just put my hand up. I think that responsibility really made me improve my game, in all areas.”

Such a reputation had rugby union clubs reportedly interested during Richards’ Wigan career, with Sale Sharks the most public enquiry. How close was the code-switch?

“I got an offer a couple of times to play rugby union, while I was in England,” Richards confirmed.

“I would never have done it, I was a Rugby League guy and there was a massive difference; it didn’t interest me.”

Never distracted by a move to the 15-man code or the NRL, for that matter, the clinical winger developed into a leading figure in a Wigan side in its quest to return to former glory.

A sixth place finish in 2007, fourth in 2008 and sixth again the following year saw Wigan slide back into familiar territory, all with Richards’ barnstorming try-scoring and clinical kicking becoming a key component of the side.

Then the 2010 season came, as the figurative doors slid for both Richards, personally, and the club, with Michael Maguire at the helm.

They derailed the dominance of Leeds and Saints, defeating the latter 22-10 in the Grand Final as well as winning the League Leaders’ Shield, with Richards awarded personally for his efforts.

“That was the best season of my career; we were slowly building after 2006 being a bad season,” he said.

“Michael Maguire came in and really galvanised the group and we were training harder than ever. We had people like Sam Tomkins and Liam Farrell coming through and it was like when we were at Wests Tigers.

“To lead that side to the success we had, and to be named Man of Steel and Albert Goldthorpe winner was a huge moment for me.”

A five-month lay-off hindered any real period of celebration for Richards, who was forced into another spell on the sidelines.

He came back to guide Wigan to the 2011 Challenge Cup victory over Leeds, before the club followed that up with the League Leaders’ Shield in 2012.

Richards’ final bow saw him directly reciprocate the circumstances that saw him join the Warriors, having already agreed to return to Wests Tigers in 2013.

“I’d torn my Achilles tendon in the Grand Final in 2010 and then I came into the 2011 season late, without a pre-season, after five or sixth months out,” he said.

“To come back against Leeds and win the Challenge Cup was a really special one for me, personally. In 2012, we were the best team again but just fell short of the finals.

“I left Wests and went out with a win. I didn’t think it could get better for me, than that, in my career. To go out after seven years having won those finals with Wigan was really emotional for me.”

Richards return to Wests, aged 32, with a point to prove, as a rapid return to form in the Southern Hemisphere even saw him touted for a State of Origin call-up.

“That was a big challenge, to be away for so long,” Richards admitted. “People spoke Super League down in Australia and I went back to prove that I still had it and I’m proud I did that.

“It was hard work; the injuries were adding up and I struggled at the top end for speed, but the experience you get from game management helped in the department.”

Richards now works for Wests Tigers as a Foundation Ambassador, as well as working full-time in construction equipment sales.

Current Wests coach and former Wigan chief Maguire even dragged him out of retirement for the NRL Nines this year, as Richards dusted off the boots against South Sydney Rabbitohs.

Four years on from having retired, after a solitary campaign with Catalans Dragons brought a premature end to a two-year contract, Richards has no regrets about his career or his time in Super League.

“I thought, ‘If I don’t take that opportunity I’d have wished I had,” he says.

“I’m glad I did it and it’s pretty unfortunate that my body let me down. Every day was a challenge with my knees and I got to the stage where it was too much for me.

“I wanted to go out on my terms. Once I did that, I retired knowing I’d given everything I could and I’m very proud of what I achieved in my career.”