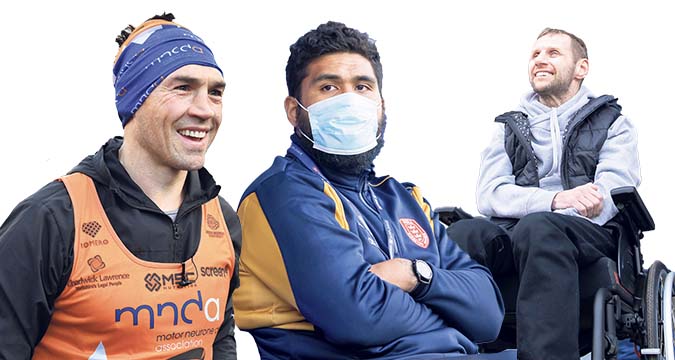 The year 2020 will long be remembered after we have found a way to counter and eventually eliminate the Covid-19 virus.

For a long time we thought that Rugby League might not be played at all for the rest of the year after the game was shut down in March.

Fortunately it came back again in August, and, by hook or by crook, it managed to continue to a memorable Grand Final at the end of November that was won in the last second of the game by St Helens.

Surely there will never again be an ending to a major game that could be as dramatic as that one.

But Covid and its impact on the game wasn’t the only thing in the Rugby League headlines throughout 2020.

The most shocking news at the end of 2019 was Rob Burrow revealing that he was suffering from the incurable condition known as Motor Neurone Disease.

Burrow made his condition public with great dignity and he managed to play his part in a testimonial match last January that had been originally scheduled for his former team-mate Jamie Jones-Buchanan’s testimonial. JJB agreed to share the testimonial day with Rob, and the two players were rewarded with a full house at Headingley, who witnessed the little scrum-half take to the field for the last time.

After that game, the fundraising continued, and it climaxed with Kevin Sinfield’s extraordinary feat of running seven marathons in seven days at the end of the year, raising more than £2.5 million for the Burrow family and for the MND Association.

And then there was Mose Masoe.

He was paralysed and the initial diagnosis appeared to suggest that his condition may be permanent.

Mose spent several weeks in the specialist spinal unit at Wakefield’s Pinderfields Hospital and he received great support from the Rugby League Benevolent Fund and from the Robins, with the latter promising to honour his contract come what may.

That decision took a terrible burden off the shoulders of Mose and his family and helped him to concentrate on slowly trying to improve.

And improve he did, to the point at which he was actually able to walk into a stadium, admittedly on crutches, by the end of the year.

What was particularly notable about both Rob and Mose throughout the year was their refusal to feel sorry for themselves and their determination to live lives that were as full as they could possibly be, given the conditions they found themselves having to bear.

Everyone in Rugby League rallied around them, but Kevin Sinfield went far more than the proverbial extra mile in running those seven marathons and actually maintaining his time over the seven successive days.

His was a remarkable achievement, done on behalf of a friend and colleague, and Kevin made it clear that he would do the same again if necessary. Raising more than £2.5 million was an extraordinary achievement that the rest of us can simply marvel at.

Normally at the end of the year I nominate someone to be my man or woman of the year (or both).

I salute Rob Burrow, Mose Masoe and Kevin Sinfield as my three Men of the Year in 2020.

For as long as we live, we will associate the year 2020 not just with Covid, but with those three remarkable individuals who have been such an inspiration for all of us, whether or not we love Rugby League.