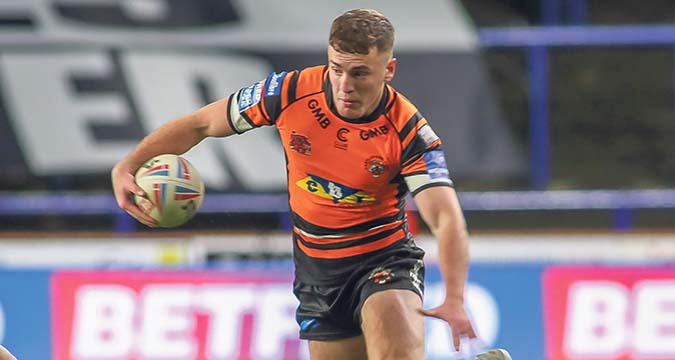 Castleford Tigers proved to be too tenacious for Leeds Rhinos today at the Totally Wicked Stadium in St Helens, defeating their Yorkshire rivals 18-10 to go two games unbeaten at the start of the new season.

The Tigers were never behind after Oli Holmes scored his second try in two weeks early in the game before Jake Trueman demonstrated brilliant footwork on 25 minutes to create a brilliant try for Niall Evalds, with Danny Richardson converting both tries to give the Tigers a 12-0 lead.

Luke Briscoe then replied for the Rhinos, but Rhys Martin couldn’t convert from the touchline.

In the second half the Rhinos edged closer when Matt Prior scored from close to the line and Martin’s goal made it all to play for at 12-10.

But the Tigers never conceded the advantage to their opponents, and it was Jordan Turner who added their third try, goaded by Richardson, to give the Tigers an eight-point buffer that was enough to secure victory.