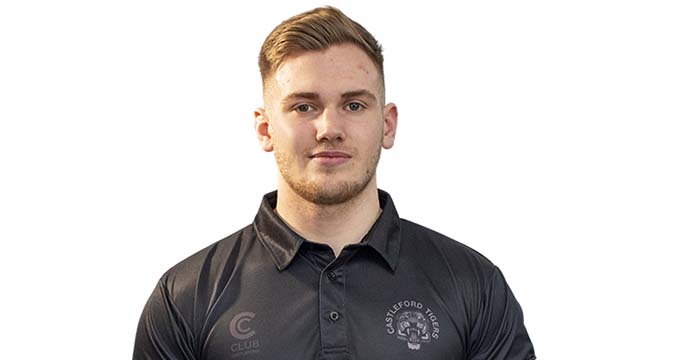 Top prop prospect Brad Martin is aiming to build on his first appearance of 2021 and help Castleford Tigers bounce back from their first defeat.

After beating Warrington, Leeds and Leigh, plus Hull KR in the Challenge Cup, Daryl Powell’s Tigers went down 22-12 at Wigan on Thursday.

A glut of injuries gave Martin the chance to add to his to debut appearance in last season’s 38-24 win over Hull KR, when a bright performance helped earn him a contract for the current campaign.

“I was excited to get another chance, and I thought I did okay,” he said, after coming off the bench.

“We knew they would be aggressive, so I just wanted to get out there and put some big hits in straight away and try to make my mark.

“It’s disappointing to have lost, but we’ve won three out of the four in the league, and Wigan are one of the top sides in the competition.

“I don’t think the scoreline showed what the game was like, because we gave them a good fight. There are improvements for us to make, but we can take some positives too.

“Wigan are a tough side, and these are the kind of games you want to be playing in. It’s great to get some more minutes under my belt, and I just want to keep improving.”

Along with hooker Cain Robb and centre or second rower Brad Graham, Castleford have high hopes for Martin.

“We have a good bunch of young players,” he told the club website.

“We push each other and we all want that chance to show what we can do.

“There are some great players for us to learn from, and for myself, Sam Hall and Lewis Peachey, Grant Millington has been really good.

“If we can take things from each of the senior players, it will help us massively.”