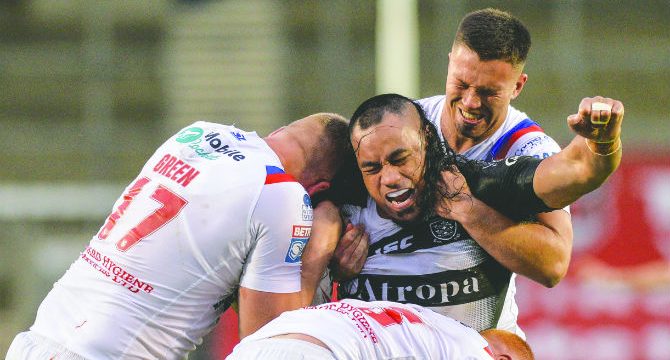 Any integrity the current Super League season had went out of the window on Wednesday when Warrington were granted a 24-0 forfeit victory over Salford.

The Red Devils, who on Monday had to field two players with broken ribs and another suffering with illness to raise a team, were due to play their eighth game in 32 days, a schedule that has decimated their squad and left them with just 13 fit players.

They were due to play a fresh and rested Warrington team that hadn’t played for 17 days due to Covid cases at other clubs.

It was a blatant and dangerous health hazard that put the welfare of Salford’s remaining players at risk.

And it was so easily avoidable. The postponement of Castleford’s game with Huddersfield provided both the Giants and the Wolves an alternative fixture, a game that has now been pencilled in regardless.

But not before Salford were punished by being forced to concede the game, handing Warrington a free win that could have substantial implications on the race for a play-off position.

The integrity of this year’s competition was hanging by a thread already. Catalans, as an example, have only played four of a possible eight fixtures against the other teams currently in the top five and have only managed one win, which came against a Leeds Rhinos side that had made 15 changes and handed out five debuts ahead of their Challenge Cup semi-final with Wigan.

Yet the Dragons currently occupy a top-four spot due to the win percentage system which has seen them pick up six of their eight wins against teams currently in the bottom four of Super League.

Now another team has been presented a free victory. Integrity is now effectively nil.

Of course, it’s not Catalans’ fault, nor is it Warrington’s nor is it even Super League’s fault. The current Covid pandemic is causing major disruption across society and the competition has done its utmost to make the best of a very bad situation.

But the decision to hand Warrington a victory is completely against the flexibility the competition has been praised for throughout the post-lockdown season.

Fixtures have been altered at impressive pace and clubs have stepped in at 24 hours notice to ensure games could take place. There was no reason why this couldn’t happen again here.

More so, it is a smack in the face of player welfare, something the sport claims to pride itself on.

If player welfare is so important to the competition, they will implement the fixture re-haul proposed to cut the season short and implement an extended play-off series in its place.

For many clubs, the season in its current guise is over both on and off the pitch. Excluding the top five, play-off prospects are gone. For many, they are playing dead rubbers.

Not only that, they are playing games with no importance with very short turnarounds that are increasing the risk of injury.

The reason the season was backloaded with fixtures was to ensure as many games as possible could be played with fans back in stadiums. It had been hoped attendances would be allowed from October 1st but alas, that hasn’t happened. As such, the revenue clubs were hoping to make isn’t there.

With so many fixture cancellations, it’s clear the season won’t end with every game fulfilled. It means, through the fault of nobody, the final league table will be flawed.

So it raises the question; why are they carrying on?

The argument is, and always has been, that games need to be played to fulfil the Sky Sports TV deal.

But a format can be manufactured that would provide the broadcaster with a significant number of games.

As it stands, Sky are due to broadcast four fixtures in round 20, which would be the first-round cut from the shortened regular season.

Even if they decided to show all ten games from the final two rounds, which is highly unlikely, as well as the three play-off games, it would give them a total of 17 games between then and the end of the season.

However, an eight-team play-off structure would manufacture nine meaningful games that Sky would no doubt want to broadcast, compared to 17 both they and the audience, could take or leave. It’s a quantity or quality situation.

Not only that, it would reduce the risk of injuries by easing the number of games being played and give the stars a proper break before each game, which would no doubt have a positive impact on the quality of games on show.

More teams get a crack at the play-offs, easing frustrations that have seen some teams gain an advantage due to an unfair set of fixtures.

It appears, on the face of it, a very easy, logical decision to make.

Whether it happens is a different matter. But if the welfare of their players is important to them, it’s something they will push for. If they insist on pushing forward, they have their own players to answer.