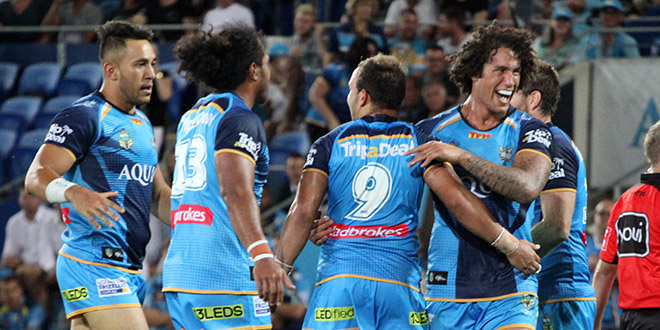 The Titans made one late change on their bench, with Leivaha Pulu replacing Morgan Boyle. Nathan Peats, Jarryd Hayne and Jarrod Wallace were all backing up from Origin III.

James Maloney was rested for the Sharks, with fellow NSW star Jack Bird moving into the halves and Kurt Capewell starting in the centres. Sam Tagataese and Jayson Bukuya started in the pack, with Andrew Fifita and Luke Lewis both on the bench, while former Leeds star James Segeyaro returned from injury on the bench.

The Titans secured an 8-0 lead at half-time with unconverted tries by Konrad Hurrell and Ashley Taylor as the rain poured down.

And in the second half the Titans’ dominance was extended, as they scored further tries from Taylor, Kevin Proctor, Englishman Joe Greenwood and substitute Pat Politoni. Tyrone Roberts added three conversions.