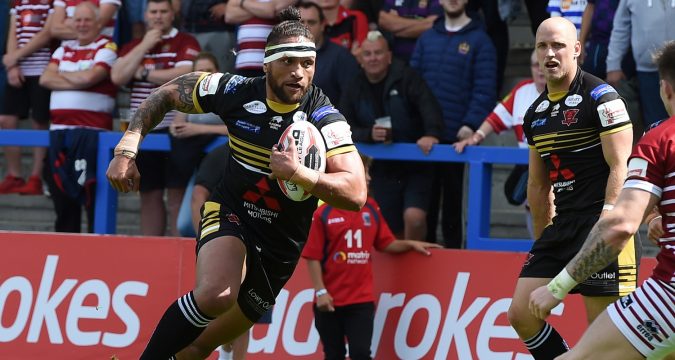 He may have gone off injured during Castleford’s win over former club Leeds, but Zak Hardaker continues to display the credentials which could yet make him a two-time Man of Steel winner before the season is over.

A debut in our team of the week for The Beast – but it’s a well-earned inclusion this week. Vatuvei was at his destructive best as Salford coasted past Huddersfield at the weekend, with the New Zealand international grabbing an impressive brace in the process.

Just as Wigan appear to be peaking at the right time, so too do their key men. One of them is Anthony Gelling, and the centre was in great form again on Friday night as the Warriors saw off Hull – with Gelling scoring the crucial try to put Wigan ahead late on.

It was a welcome return to form for Salford on the weekend, and centre Kris Welham was instrumental as the Red Devils kept alive their hopes of a top-four finish with victory against Huddersfield.

On the wing instead of Mason Caton-Brown, the powerful Wakefield winger Bill Tupou certainly caught the eye on Thursday. Like so many Wakefield players, he was unfortunate to be on the losing side against St Helens – but his performance was certainly impressive regardless of the result.

Salford’s talismanic half-back Robert Lui was back to his eye-catching best on Saturday afternoon. Can he repeat the trick again this weekend to keep the Red Devils in play-off contention?

If St Helens do make the play-offs, how important will the decision to throw Danny Richardson in last week at Wakefield prove to be? The young scrum-half is one of the British game’s best young talents – and he certainly proved that last week at Belle Vue.

It was a memorable night for the towering St Helens prop in more ways than one. He was phenomenal for the Saints on the field, before jetting off to the hospital to catch the birth of his child!

He may well finish the season in the halves given Luke Gale’s surgery this week – but last weekend, Paul McShane was in imperious form at hooker as the Tigers extended their lead at the top of Super League with victory over Leeds.

Speaking of Leeds, they were not a million miles away against Castleford – and prop Mitch Garbutt had an impressive evening for the Rhinos.

Is Murdoch-Masila still a contender for Man of Steel? He appeared, like so many of his Salford team-mates, to be back on form at the weekend during the Red Devils’ thumping win over Huddersfield.

The dynamic back-rower was in magnificent form, just as he has been for most of this year, at the weekend. He grabbed the final try during the Warriors’ win against Hull but his performance was all-action from minute one to minute 80.

Naturally, Wigan’s inspirational captain gets a place in this week’s team after another incredible performance at the weekend.