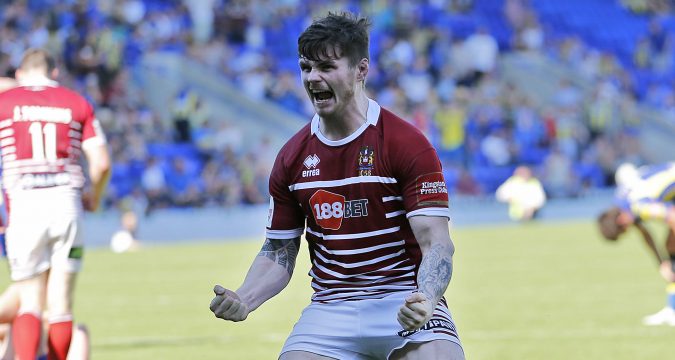 It was another vintage night for the 2015 Man of Steel: who scored twice and was defensively superb during the Tigers’ historic victory against Wakefield.

He’s back. Eden notched up try number 35 during Castleford’s win over Wakefield on Thursday and now looks odds-on to break Denny Solomona’s record of last year.

Centre Oliver Gildart was one of a number of Wigan players who caught the eye during the Warriors’ final game before Wembley. He was superb as Shaun Wane’s side coasted past Salford.

How could you leave Castleford’s four-try hero out of this week’s side?

On the vast Wembley surface, the edge players for both sides will be crucial on Saturday afternoon. Expect Wigan’s Joe Burgess to have a big say in the outcome after another strong showing on Friday night against Salford.

Huddersfield just will not give in when it comes to the race for the top-four: and a hat-trick from half-back Gaskell helped the Giants stun Hull FC and keep their play-off hopes alive.

It may not have been Gale’s best game of the season on Thursday, but he produced some telling moments to help Castleford get past Wakefield and win the League Leaders’ Shield.

Nuuausala warmed up for his first trip to Wembley in some style, with a barnstorming display to help Wigan win against Salford and keep their play-off hopes on track.

Parcell has been one of the standout players in a Leeds side now increasingly likely to finish second this season – he was again superb at the weekend as the Rhinos edged past St Helens.

He’s signed a new deal with Castleford this week – and on this form, who could blame the Tigers for tying Millington down. He has been consistently outstanding this year: Thursday was no different. Kirmond was part of a losing side as Wakefield came up short against Castleford – but the Trinity captain crossed for a well-taken try and was in good form throughout.

He’s been nudged out to the back-row here due to the form of so many front-rowers this week – but Huddersfield prop Sebastine Ikahihifo continues to press home his claim to be Huddersfield’s player of the year.

The menacing Cuthbertson was destructive, high-energy and non-stop throughout Leeds’ win against St Helens last Friday.