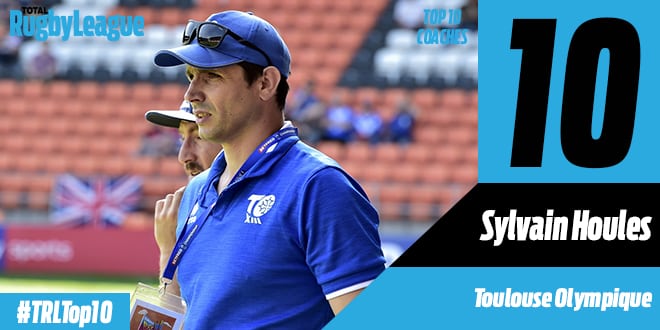 THERE’S A FIRE in the belly of Toulouse Olympique and it is being stoked by the refusal of their Championship opponents to travel to France.

Coach Sylvain Houles has lifted the lid on the simmering anger among his players at the increasing number of rival teams who have opted out of a trip to Toulouse because of the dispensation from the RFL for part-time clubs.

Under current UK Covid control guidelines anyone returning from France has to quarantine for a minimum of five days and the RFL has agreed to allow semi-professional teams to decline to travel.

Bradford, Featherstone, Newcastle and Oldham have already taken up that option. And even though London Broncos are a full-time club, they refused to travel, with the RFL awarding a 24-0 win to Toulouse and referring the matter to its compliance panel.

“I believe these clubs could have made an effort to come,” Houles told League Express.

“At the end of the day these players have got two jobs and one of their jobs is to play Rugby League, but they have chosen not to and it is this kind of attitude that puts the fight into our squad this season.”

It’s that fighting spirit that has put Toulouse top of the Championship. And despite missing out on invaluable home games, Houles believes the attitude of rival clubs will be the biggest boost for his team’s push for promotion to Super League.

“Teams don’t want to come, it’s as simple as that, and they are allowed to decide because they are part-time. They don’t want to take five days off to quarantine when they return to the UK, but we have to do this every time we go to England. That’s five days, once a year, when they can still prepare for their next game, and we have agreed to pay for all of the tests they will need.

“We offered the same financial assistance to London, but they simply refused to come.

“Those teams don’t want to come here, so we can’t count on them. It’s a fact that they don’t know or even care what we are trying to do and we don’t want their pity.

Motivation but no favours

“What we are doing is turning that attitude around and putting it into our training sessions and performances.

“Of course, Covid is responsible for this and we knew that given a choice the part-time teams would not come to France. We can’t rely on those teams to help us so we have to help ourselves.”

Houles remains confident that he can guide his club through the stop-start nature of the season and that Toulouse will be pushing for promotion at the end of it.

He added, “At the moment we have four games postponed and they are going to be cancelled because we aren’t going to be able to play them.

“That means we will only be able to play Bradford, Newcastle, Featherstone and Oldham once. We haven’t got many home games left, so it’s going to be a very short season.

“We’ll be fine because of the win percentage, but from the sports side we wanted to play as many games as possible and particularly in front of our home crowd, but no other team is in the Championship to do us a favour.

“We’re in a situation where we need to fight, and fight hard, for everything.

“We had to fight in the beginning to re-establish this club in Toulouse and in the past five years that we’ve been playing in England we haven’t been very welcome by the other teams.

“But at the same time we are trying to do everything we can to keep the competition alive so we can achieve our goals.

“We want to look after ourselves and do whatever is in our control to finally achieve our goal, which is Super League.”

Houles described the mood among his players as “defiant and positive”, despite the challenges of such a disjointed season.

He said, “The mood is good, and we are doing everything we can to keep our spirits up, but without playing week-in, week-out, the players can find it difficult.

“I have to say they are being fantastic about all of this, they keep turning up with a smile on their faces, but underneath that all they want to do is play.

“We are getting used to the situation because we’ve been doing it from the beginning of the season, so we’ve developed our systems to make it work in the best way for us. We’ll have a break, because nobody wants to play us, and then in the build-up to a game you can sense the hunger in the players.

“It could be a danger to have so much time to prepare for games, so we have to optimise the time we have.

“We spend more time focusing on fine details and new techniques. You can never be perfect with your moves and your timings, but we’re working hard on it and that is how we are dealing with the situation at the moment.

“It’s been working, quite clearly, with the results we have been getting.

“The preparation for our last game against Sheffield was incredible and we took that attitude into the game. It was a near-perfect performance until the last ten seconds, when Sheffield scored. We have even turned that into a positive because all week at training we have been telling each other that we have to be on it for the full 80 minutes.

“We’re shaping up the same way for the Batley game (Sunday 3pm at the Fox’s Biscuits Stadium), which will be a good challenge for us. They are a good team who are playing well and this is what we need to keep our focus and concentration.”

Another motivational tool for Houles’ squad is the anticipation of a return to their home ground, Stade Ernest Wallon.

“I went to see the French Grand Final at the Wallon last week and it takes your breath away. It’s a stunning venue for Rugby League and it’s agonising for the players that they can’t perform on that pitch.

“At the end of the day we have to tell ourselves that one day we will be back there and playing regularly on that fantastic pitch.

“At the beginning of the season it was such a pull for the players, but as the competition continues it’s looking more and more unlikely.

“But, again, we have had to turn that around psychologically and say to the players, just imagine winning your way into Super League season at the Wallon, and if it’s not this year then imagine the start of next season in Super League at this incredible stadium.

“They don’t lack motivation, they are all desperate to play at the Wallon.

“To maintain that state of mind we hold as many training sessions as we can on the pitch so they can get used to the surface. I like to change venues for different reasons, but training at the Wallon seems to bring something out in the players.”

A Championship Grand Final would be quite a spectacle at such a venue, but Covid complications have delayed any firm plans by the RFL for the end-of-season climax.

Houles added, “The Grand Final venue hasn’t been decided yet, but hopefully by then we will be able to have visiting teams here.

“Last year the final was a home game for whoever finished top of the league, so we have to aim for that possibility, but who knows?”

Toulouse and Featherstone Rovers are the current front-runners for the Super League promotion showdown, but Houles believes other teams will come into contention as the season progresses.

He said, “When you look at the league table obviously Featherstone are up there with us and they will obviously be fighting all the way. They’ve got a great defence and some real strike players.

“But it’s not a two-horse race. If you fall for that trap you will suffer, because you’ve got London, Widnes and Halifax coming up, all very strong teams.

“Some of the sides in the Championship have started slowly but they are gathering momentum and it’s a great competition.

“We want to be there at the end of it and we will use every motivation we can get to keep our eyes on that target.”