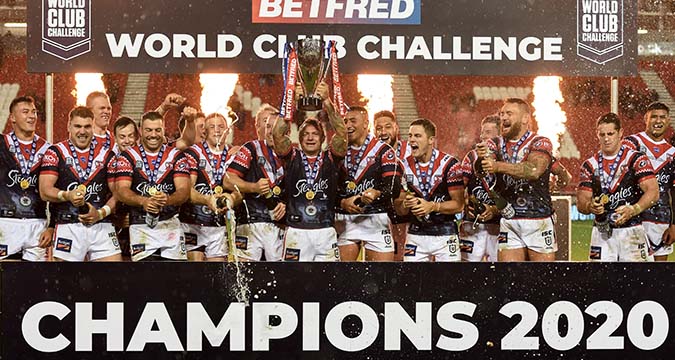 Rugby League World’s Treiziste Diarist, Pierre Carcau, offers an insight into the way the French media suffers a persistent one-way blindness when it comes to rugby players switching codes, as one of the greats of French rugby union, Frédéric Michalak offers a helping hand to Australian NRL club Sydney Roosters.

Among all the outdated clichés you may hear in France about rugby à XIII, there is one which is persistent, in the older generations at least.

If a union player – or a manager – decides to switch from union to league, it would probably be due to an issue he may have with the federation or his club.

Jacques Fouroux, who promoted the France Rugby League competition project in the nineties and was the first chairman of Paris Saint Germain XIII at the launch of Super League in 1996, could be the perfect illustration. If you only take a limited view of course, as what he brought to Rugby League was much more than a grudge against the conservative rugby union federation (FFR).

The cold war between union and league in France didn’t encourage links between the two codes either. Moreover, bureaucratic red tape and stringent terms of the union federation, not to mention the threat of a life ban for players, dramatically reduced the freedom of French sportsmen.

If legendary players like Jean Galia, Jean Capdouze and Pierre Lacaze were the first and the most famous names associated with a change of code from union to league, the traffic has been in the opposite direction in the last few decades. Christian Labit, a former player of Lezignan, who joined Narbonne and Toulouse union clubs, being a good example of these XIII to XV transfers.

Fortunately for the younger generation of players, the situation has improved. It is now easier for players, managers or coaches to switch codes, sometimes just to get a new experience and see how rugby is played in the other camp (in the “maison d’en face” as the treizistes usually say). The tremendous risk taken in the past by ‘Quinzistes’ moving to league has been replaced with a very light inconvenience in comparison; leaving the radar of the national and the sport media.

Remember all the fuss about Israel Folau joining the Catalans Dragons after almost provoking the collapse of the Australian Union federation? Well, It would be natural for an average rugby union or sports journalist to ask themselves; “How is Folau doing in League? Did he adapt to the game; to Perpignan, to France? Did he regret his change of career? Yet these questions didn’t arise in their columns. You see, As long as a player has left union, he is of no more interest to the French media. As for Sonny Bill Williams? Oh, just A former All Black; once he joined Toronto, he could have been regarded as retired by the media in France.

Without crying conspiracy, it’s funny to see how the French media instantly (or intuitively) neutralise the great names of rugby (both codes) once they belong to another field.

A new example of that is the case of Frédéric Michalak.

Frédéric Michalak is, no less, the best kicker ever of the France national rugby union team, the leading Test point scorer of the “Bleus”. His career is remarkable: not only did he play in France, winning many trophies, but he also played in South Africa, winning three Currie Cups. He’s presently a manager of the Blagnac rugby club (a club close to Toulouse, who shared their stadium with Toulouse Olympique XIII until last season).

Definitively a great name of French rugby even if you’re not fond of union.

This week, we learned that he would give a hand to the Sydney Roosters. One of the greatest Rugby League clubs in Australia. For treizistes, it was only half a surprise. He visited the Roosters and even the Brisbane Broncos in 2019. Interestingly, Michalak has a cousin playing league in France: Jonathan who plays for Toulouse Olympique. A 1m 80 and 103 kg prop. So, Rugby League is no terra incognita for the Michalak family.

Which also illustrates that, in France at least, one can play both codes in the same family.

Michalak suggested on his LinkedIn account (quite an unusual media to announce such a great news) he would be some kind of consultant for the Sydneysiders. Promising the public, he would post some videos about his activities there. Good for him and good for us as well!

Even if at present we can only speculate about his actual role for the 2019 NRL champions, this is definitively the kind of information which can’t go unnoticed, surely?

Well, apart from the specialist treiziste media like Treize Mondial, the only national newspaper to mention it was Le Figaro, and then only on its website. Usual coverage for treizistes, but quite unusual for a celebrity such as Michalak, who is also an ambassador of the next rugby union World Cup.

As usual, the chance for French Rugby League to capitalise on a great name will be for another time.

But to remain positive; the fact that NRL and Rugby League are interesting more and more union stars, genuine connoisseurs of the game, is a good omen for the recognition of the game and the quality of the sport.

It will take a long time and a lot of patience, but by word of mouth, Rugby League may find a larger public someday.