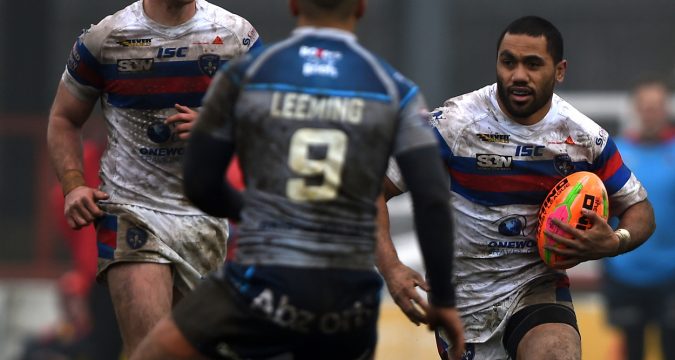 The 28-year-old former Tongan international was named in the team for the first time on Monday following a stunning individual campaign.

Tupou said the secret behind his success was focusing on the simple parts of the game, having used plenty of his focus on his comebacks from injuries in the past.

He said: “Coming into this year I didn’t think I could get in so it’s very unexpected but I’m happy to be here amongst a lot of stars in this room,” he said.

“I think it’s just about going back and doing all the basics and little skills that you don’t always think you need to work on. Looking after my body as well, the last two years I’ve been injured so trying not to get injured was important. I have played every game this season as well so that helped.

“Staying fit was probably the most important thing for me because if you are injured you can’t help your team and the boys that are out there.”

An achievement that may not be as glorified as being Dream Team selection, but maybe just as big of an achievement, is playing every single game over the course of the season.

To be free of any sort of niggle and to be able to maintain form worthy of being selected every week is an astounding achievement that Tupou is very proud of.

“That was one of the big things for me,” he said.

“I just turned up to training and prepared myself well. A little niggle could always turn into a big injury so if I picked up a knock after a game, I would tend to it straight away. That helped me big time and I’m happy that I went down that road and could look after myself.”

Tupou’s club, Wakefield Trinity, who he joined back in July 2015 from NRL club Canberra Raiders, have finished fifth in the last two seasons, a remarkable achievement for a club with a limited budget. This successful season has seen a club who are rather unsung in the grand scheme of things have three of their stars inducted into the Dream Team.

Tupou was joined by fellow team-mates, winger Tom Johnstone and back rower Matty Ashurst. This was the first time Trinity has ever had three players in the Dream Team.

Asked how his team could start pushing to try to break into the top four, Tupou stated: “I think the last few months since making the Super 8s, we focused on finishing the year well. In the Super 8s, we ended up winning three out of seven which meant we fell short of our target to win four out of seven games.

“We turned up to training every day knowing full well we couldn’t make the top four but we were willing to put in the work to get better and better and I thought we did that well. We’ll have a little rest now, come back into pre-season and then carry on from there really. We can’t take a backward step.”