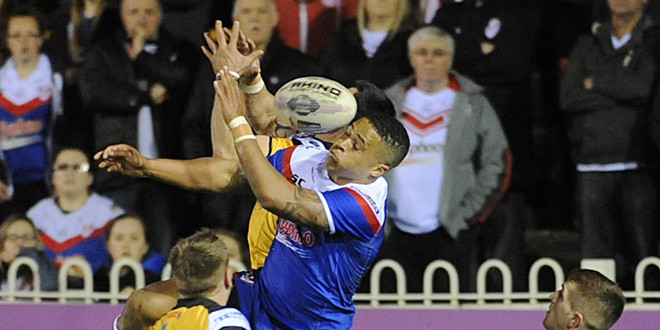 Turner, who has previously played for Salford Red Devils and Hull FC, hasn’t been on a winning side in a Magic Weekend match during his nine-year career.

The 26-year-old, who joined St Helens in 2013, is confident that the current First Utility Super League champions can clinch their first Magic Weekend win since 2010.

“I’m aware that I haven’t personally won a Magic Weekend game, but I don’t really think about that,” said Turner.

“It’s not really about that I’ve never won at a Magic Weekend fixture, that doesn’t worry me at all. I’m pretty confident that we can get the job done no matter where we play whether it’s at Langtree Park or at an away ground or Newcastle.

“We’re a confident bunch so we’ll be looking to put in a good performance on Sunday.”

St Helens are currently three points behind leaders Leeds Rhinos, and Turner isn’t fazed by the pressure that comes with being champions, and is looking forward to another Magic Weekend.

“We thrive on the pressure of being champions,” he said. “It’s a good pressure to have to be champions and that everyone wants to beat you.

“In another sense, last year’s gone so we’re not really thinking about that, we’re just focused on this year and trying our best to win it again this year.

“I think the occasion’s fantastic. I’ve played in some magnificent stadiums such as the Etihad, Millenium Stadium and Murrayfield, so I’ve been quite privileged to have gone on to do that and it’s different from your weekly game, there’s a carnival atmosphere which only comes round once a year.

“I really do enjoy the weekend and it’ll be better if we can get a win.”