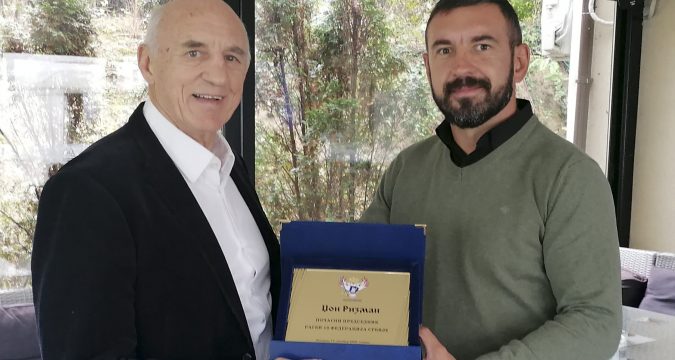 Whilst there has been some notable activity in Eastern Europe, not least in Ukraine, Serbia and this weekend scheduled for Albania, increased coronavirus concerns have seen competition postponed in the Czech Republic and delayed in Russia.

The Ukraine RL Federation held a highly successful Grand Finals day behind closed doors in Lviv, for which Legion XIII travelled 1,000 km to retain their title. The defending champions were pushed all the way by Lviv Tigers, running out 46-20 winners after trailing at the break.

In Serbia, former national head coach John Risman returned to Belgrade to be made honorary president of the SRLF. He also presented the Victory Cup and medals, with Partisan 1953 winning a four team 9s tournament. Originally played for between 1954 and ’64 – and won by Partizan in the first two of those foundation years, and again in 1961 – the trophy has been resurrected to be competed for annually.

Initial plans were to play the tournament on 9 May, to commemorate the end of the Second World War, but Covid-19 meant delaying it to 20 October, the date of the liberation of Belgrade.

Vladan Kikanovic, Serbian Rugby League Federation general secretary commented: “This was great day for Serbian RL, with support of Belgrade Rugby League we made history again. We are all proud and especially that we named John Risman as honorary president of Serbian RL. John left a great legacy and we all respect him a lot.”

From next season, plans are for the Victory Cup to move back to its original date and the Belgrade Liberation Cup instituted to also be played for annually, in October, as a 9s competition.

This weekend, the first game in 2020 in Albania will be played, a 9s encounter between KR Regbise Tirana and KR Iliret, at Tirana United. Arnaldo Telo, president of the Albanian Rugby League Association noted: “I would like to give special credit to our sponsors and partners who are supporting this match. It gives us further confidence that we will have the support needed for our plans for Tirana to join the Greek domestic competition in 2021.”

The Russian Cup was due to commence this weekend but has been put on hold. A statement issued by the Association of Russian Clubs confirmed, ‘Unfortunately due to the rising levels of Covid-19 cases across Russia, the ARLC board have taken the unfortunate yet necessary measure to cancel The Cup of Russia involving 16 clubs across the country.

‘The current trend of daily increases in confirmed Covid-19 cases and government requirements to fight the spread of the virus have made it impossible for the competition to go ahead. The ARLC will continue to react to the ever changing situation across the regions of Russia and are hopeful that some friendly fixtures will be held between clubs prior to the New Year once the situation improves and restrictions are lifted.’