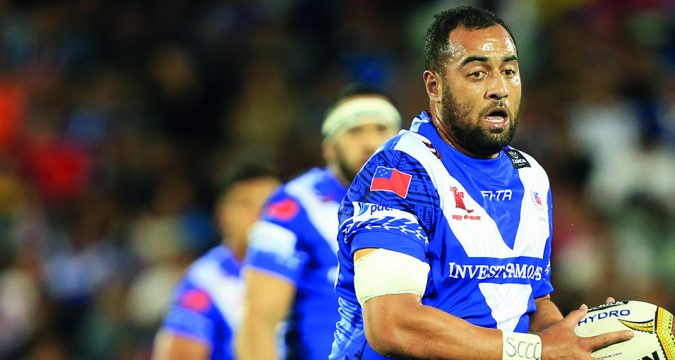 Scotland may have been reeling earlier in the week from the impact of three players having been sent home, but they recovered their spirit to secure a 14-14 draw with Samoa in Cairns, outplaying Samoa for much of the game largely thanks to their playmaker Danny Addy.

Sadly for the Scots, however, Samoa will progress to the quarter-finals with a superior points difference, and the Scots become the second side to exit the World Cup after Italy’s defeat to Fiji in Canberra on Friday.

The Bravehearts showed great determination to shock the Samoans early in the game, and they scored after just four minutes when Addy kicked cleverly over Samoa’s defensive line for fullback Lewis Tierney to touch down.

Samoa replied with their first attacking raid of the game when Junior Paulo barged his way over after receiving a short ball on the line to draw level at 6-6.

Addy then restored the lead to Scotland by successfully landing a penalty before Frankie Mariano intercepted a Tim Lafai offload to touch down for a converted try and a 14-6 lead, which they held until half-time.

The Samoans were desperate to get back into the game to keep their World Cup hopes alive, and in the 49th minuteMatthew Wright touched down wide out to reduce the deficit to four points.

And as heavy rain started to pour, the Samoans finally broke through again when Young Tonumaipea was put through a gap and went over untouched to level the scores.

Wright was unable to add the conversion and the scores remained level.

In the 73rd minute Scotland had a chance to go in front when Sam Tagataese conceded a penalty, but Addy was unable to convert the chance.

And, in the 79th minute, Addy’s field-goal attempt was blown to the side of the posts as their World Cup campaign came to a frustrating end.

Samoa progressed into the quarterfinals by the skin of their teeth, finishing equal with Scotland with one point each, and they will now play Australia in Darwin in the quarter-final.

Full reports, phots and statistics from all the weekend’s World Cup matches will feature in Monday’s edition of League Express.