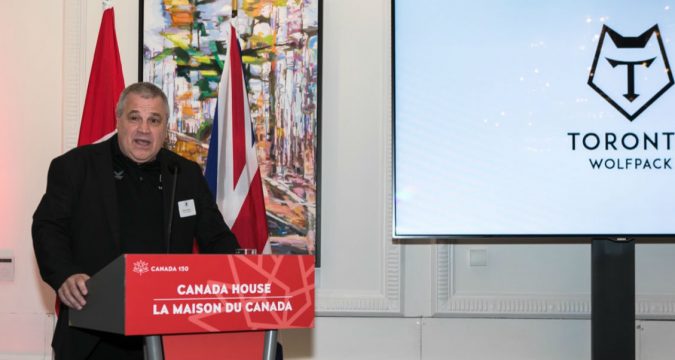 Toronto’s Martin Vickers believes the club’s new partnership with Manchester Metropolitan University is the biggest example yet of the club’s dedication to growing the sport.

The Wolfpack confirmed earlier this week they have secured a deal that will allow them to use the university’s Platt Lane Sports Complex, previously owned by Premier League giants Manchester City, as their new UK training base.

However, the newly established relationship looks set to have a much more significant impact on the British game, and Manchester in particular.

As part of the model, Toronto will be interacting with over 5,000 school children within Manchester and the surrounding boroughs in an attempt to boost the profile and accessibility of the sport in the area.

The programme will be the biggest schools scheme in the Central Manchester area, with the Wolfpack looking to make its mark on the city following its relocation from their original base in Brighouse.

Beyond that, the Wolfpack will also coach the university’s Rugby League teams and will provide students with academic opportunities in subjects such as sports science, health and marketing.

Vickers, who played a key role in making the deal become a reality, believes the new partnership has the potential to build a brighter future for the British game.

“We want the beneficiaries of this programme to be the strong community Clubs in the area like Manchester Rangers and potentially the professional clubs together with the British game as a whole.

“The last thing we want this partnership to be about is the provision of facilities alone and a logo on our kit. Students will all be embedded parts of our infrastructure and will be part of our groundbreaking journey as sport’s first transatlantic Club.

“This is another good example of the fact that not everything for us is just about the Wolfpack. We see ourselves as ambassadors for the game. The school’s programme will be the biggest ever conducted in the centre of Manchester and hopefully, over time this will help the professional clubs with more players and potentially more supporters when we are on the road in the area against Swinton Lions and Rochdale Hornets.

“We feel honoured to be asked to coach Manchester Met’s university team and our coaches want to get them to be successful and reach the Premier League of University Sport.

“This is a big investment from us into the British game. We are genuinely passionate about the game of Rugby League and if our Club can be a vehicle for mobilising participation in the Sport in the UK and Toronto, we will have achieved something special.”

But what about Toronto? Well, Vickers revealed that one of the next steps for the club is to build a similar partnership within their own city that, combined with their relationship with Manchester Met, could bring two leading academic parties from across the globe together.

“We are also keen to link up with a Toronto-based partner and already have good relations with the Toronto based Universities” he confirmed.

“As part of what they’re doing they want to do all kinds of academic research across the two countries. It’s a really ambitious project that’s more than being about the game of Rugby League. If we can bring together powerful cities in major cities like Manchester and Toronto there could be no limit to the level of ambition they can gain from that partnership.”

An insightful Q&A into the business behind Toronto Wolfpack with Martin Vickers is in the new edition of Rugby League World. Get your copy today in stores, or alternatively buy online at totalrl.com/rlw.