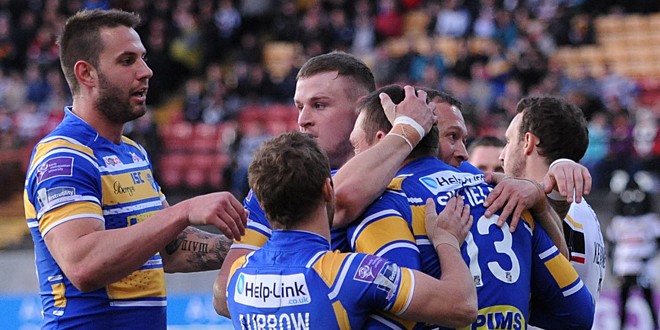 Ashley Gibson, Jordan Tansey and Liam Finn came back into the Tigers’ side that lost at Huddersfield on Sunday, replacing James Clare, Michael Channing and Jamie Ellis.

The Rhinos brought in Ben Jones-Bishop to replace the injured Ryan Hall.The Tigers started the game brilliantly, when Kirk Dixon scored the opening try, getting on the outside of Tom Briscoe.

Marc Sneyd added a touchline conversion and then a penalty conceded by Mitch Achurch. But the Rhinos hit back with some superb passing to the right, with Watkins giving the final pass for Jones-Bishop to score his first try.

And it was Watkins who gave Leeds the lead after 30 minutes, when his strength allowed him to take several defenders over the line, with Sinfield adding his second goal from touch.

But as the first half entered its closing stages the Tigers snatched the lead when Sneyd beat several defenders with superb footwork, adding the goal himself for a 14-12 interval lead.

But when Jones-Bishop scored his second try after 46 minutes the Tigers would never regain the lead, even though Sinfield couldn’t add the goal.

Castleford made a number of errors as they tried to get back into the game, but the Rhinos refused to yield and remain at the top of the Super League table.