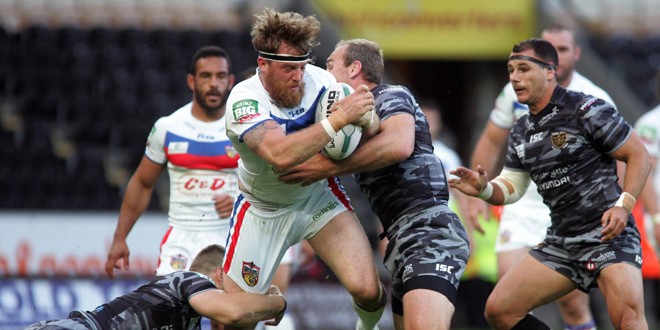 What to look out for
18’ – The home side score first despite being on the back foot. A smart offload sees Danny Houghton go over. Ben Crooks converts: 6-0

40’ – Aaron Heremaia throws a dummy to cut the Wildcats defence in half before finding Jordan Rankin in support. The youngster goes over under the sticks. Crooks adds the extras: 12-0

50’- Yet another Hull sucker punch as Ben Crooks snatches a four-pointer to put the Airlie Birds in a commanding position. Crooks fails to convert his try: 16-0

55’ – The Wildcats finally hit back, thanks to Richard Mathers who finishes a move started by Danny Kirmond and Matty Ryan. Jarrod Sammut misses the conversion: 16-4

61’ – Chris Riley and Jason Crookes get 10 minutes in the bin for fighting.

62’ – Daniel Smith scores on the back of the disruption to give the Wildcats a sniff at glory. Sammut lands the extras: 16-10

65’ – Danny Washbrook makes a break, sells a dummy, then fires the ball to Lucas Walshaw who scores in the corner. Sammut nails the touch-line conversion: 16-16

68’ – Danny Kirmond penalised for a shoulder charge. Black and Whites opt to kick at goal but Crooks misses.

73’ – Richard Moore unleashes a stunning offload and the ball is recycled. It eventually find Washbrook after a string of passes and he puts in Sammut, who converts his own try: 16-22

80’ – Jarrod Sammut fumbles a high kick but it’s too late for a Hull comeback.