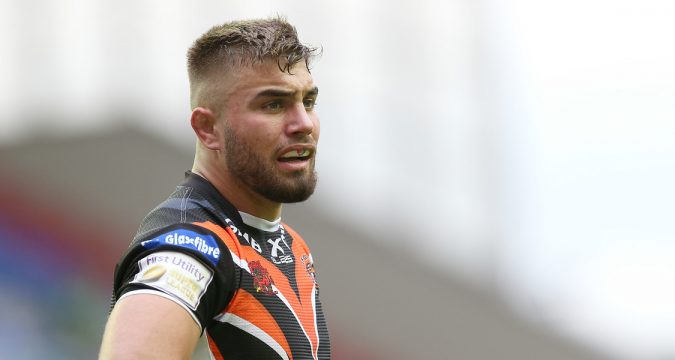 Castleford Tigers forward Mike McMeeken has admitted he is eager to make up for lost time in 2017 after an injury-hit campaign last season.

McMeeken was one of Castleford’s standout performers in 2016 before suffering a broken leg midway through the year which ruled him out for a number of months.

However, the former London forward admits he is motivated to have a strong 2017 and overcome a troublesome 12 months this coming season – saying that he feels with the squad Cas possess this year, this is their best chance yet of making the top four.

He told TotalRL: “The talent in our squad is absolutely quality this year. I think it’s a season where we stand the best chance of making the top four yet. That’s our minimum expectation.

“I had a serious injury in June which was a real downer, but I thought I was playing alright up until then. My form was a bit sketchy but I can’t wait to put it behind me and crack on and be even better in 2017.

“These things happen, I thought I was playing well before I got the injury but I’ve been through some good rehab and I got back playing before the end of the season which will stand me in really good stead for 2017.”

McMeeken’s form was so impressive in 2016 before his injury that he was being talked up as a potential England inclusion for the Four Nations, only for injury to rob him of any chance of making the squad. He admits that while he would love to force his way into Wayne Bennett’s thinking this year, his priority is helping Castleford lift some silverware.

“My focus was only ever playing well for Castleford really because we’ve got a common goal of the top four here. However, it’s obviously every Englishman’s dream to play for their country and to force my way in for the World Cup would be a real massive thing.

“But one of my other dreams is to win a Super League Grand Final or Challenge Cup Final and I’m intent on doing that with Castleford. This club has made me twice the player I was when I joined, and I really want to help repay them.”