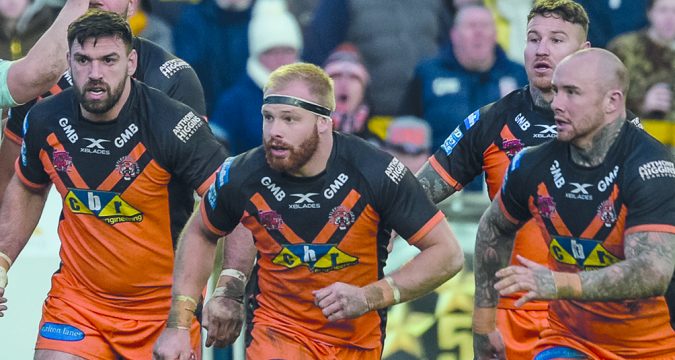 Round three is upon us and I’d love to concentrate on our upcoming fixture against Hull FC. But it’s near impossible after the amount of rumours and turmoil behind the scenes at Cas. If you believe everything you read it’s easy to fall into the doom and gloom trap. There is certainly something not right at the moment and it’s good to finally end rumours regarding the future of Zak Hardaker. However you start one rumour and it ignites ten more! It certainly seems a million moons ago since we had our best Super League season to date.

Questions need answering, Have we lost our £150.000 investment? Has Steve Gill been sacked for signing players Powell didn’t want? What is really going on?

Anyway, back to the important stuff on the field. This week we face another huge challenge in Hull FC. We always seem to struggle against Hull, dealing with their big outside backs and they always dominate the ruck. You can’t look past the huge losses of Houghton, Minichello and Taylor. But I’m sure the likes of Connor & Watts will step up and you really have to be on your toes with Albert Kelly on the opposite side. It will be interesting to see the level of intensity from Hull after two weeks of travelling Australia and two exhausting games over there. For us I’m looking forward to seeing Joe Wardle make his debut, and a week on week improvement in both attack and defence. I’m looking forward to his match.

We always seem to have good matches against Castleford down at the jungle and I’m hoping jet lag won’t play a part in the match. We are going to be missing both Danny Houghton and Scott Taylor which will hurt. I think we are probably adequately covered in the props with Masi Matongo and Brad Fash coming into the team. Hadley will no doubt cover at hooker and whilst he played this role well on loan at Wakefield last year he does lack the zip that Houghton has. We need to tighten our defence, particularly on the right-hand side as this is where we seem to get caught out.

Castleford haven’t been particularly impressive this year. Gale’s boot is still always a threat but he needs someone to read his kicks in the way that Hardaker did last year. It will be interesting to see if Greg Eden can do this. If Roberts moves back into the hales I think they will be a much tougher team to beat as I think he has been far less effective at fullback. As a team they are dangerous all over the park and with their size in the backs can break tackles and go on to score.

All in all, I think it will be a tight, well-balanced contest probably being decided by not much more than a single score. I’m hopeful that if we can make a few adjustments to our defensive line we will come away with the 2 points. After a bruising few weeks, the Dragons will be eager to add points to the board against a much-fancied Wakefield side.

Tony Gigot is a surprising addition to the bench; this after Steve McNamara had said that he would not rush his return. This, as well as the inclusion of McIlorum, shows just how thin the Catalan squad is, or possibly how crucial the management see this fixture. It will be interesting to see just how fit the aforementioned players are, and how Mead and Gigot can fit into the team together.

Mead has been the one highlight so far this season and is the only glimmer of hope going into this one. For me, the main thing on Saturday is to see the Dragons complete sets of six. So far this season, they have been their own worst enemy, and against a team with the attacking power of Wakefield, this would be a quick way to ensure another defeat.

Tom Johnstone is likely to prove the major threat for Trinity and he may feel that this game is an important one to shine in, given that it was against the Dragons that he suffered the serious injury early last season. With no Luke Walsh, I fear that the team will lack the organisation needed to contain Wakefield, and fear another moral crushing defeat on the cards.

Wakefield also have recent history on their side, beating Catalan in the last two games in France. I predict that Wakefield’s mean defence will frustrate the Dragons early on before gaining the upper hand and running away with a lop-sided scoreline. Worrying times for Catalan. Two games gone and two games won. It is certainly a dream start but after grinding out a scrappy victory against Salford, Trinity know if they want to keep on winning, improvement is a must. But after a week preparing for the trip to Catalan I feel they will be ready to face a winless Dragons side.

The Dragons have had the worst start possible and feel their form won’t change anytime soon. If I am being honest, I thought Catalans would bounce back with an electrifying start after nearly facing relegation in 2017, although a winless Dragons side makes them more hungry for a victory but I think with Wakefield winning two from two, there confidence and morale will be just about 100%.

I would like to see Trinity expand the ball to the wingers a lot more often especially with the weather hopefully being dry. I still think Ben Jones-Bishop still needs his chance to shine but his lack of carrying the ball has stopped that. Mason Caton-Brown is still to walk on the pitch in the Super League and it would be exciting to see him in action on the edges. Trinity know that a third win will keep there profile high in the Super League and keeps them in a strong position on the league ladder.

Wakefield will know that they should not go into Saturday’ss game over-confident, but with a better attitude than round 2 against Salford, they will certainly stop Catalans from getting their first win of the Super League season while Trinity stay unbeaten in 2018.