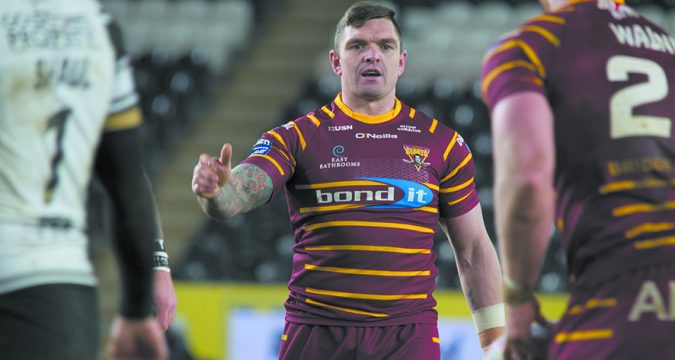 Fresh off the back of a much-needed win at Widnes, Huddersfield will be looking to make it two from two in their annual televised game.

While it was good to see us tighten up a bit last week, Widnes’ high error count was a big factor in the win, so I’d like to see us continue to improve our attack tonight, and win on our own terms, not off the back of opposition mistakes. This is something we really need to nail down tonight ahead of our visit to the DW next week, and the Leeds game on Good Friday.

To achieve this, I’d like to see the wingers getting more ball. There were a few times last week where a simple pass out wide would have seen McGillvary walk a try in, but no pass was made and nothing came of it. Anyone with a fleeting interest in Rugby League knows that Jerry can score tries, plus Murphy has quietly been making good stats this year. If we start utilising our wingers more, the points will come.

Expect a battle of the veteran halfbacks tonight. With Broughy’s contract in the news this week, he’ll be looking to show the world that he’s worth the money. Rovers are well aware of the danger he can bring, the last time these two sides met his drop goal left them fighting for survival in the Million Pound Game.

On the other side, with games against St Helens, Hull and Wigan up next, and just one win against a dreadful Catalans side, Danny McGuire will be desperate to get a win on the board and get his side’s season started before it’s too late. Both teams will be going out of their way to suppress the opposing halfbacks. Whichever side manages it best will get a big edge.

It’s fair to say that our last two games have been disappointing and a third straight defeat would leave the fans very worried indeed.

I looked at consecutive fixtures against Salford, Catalans and Huddersfield and honestly thought it would be a true indicator of our top-eight hopes. If we come up short again then I think we’ll have to already accept that the Qualifiers await.

Our pack just has to be better. I think individually our forwards are good, but they’re all a bit too similar excluding Mose Masoe. They’re all hard workers, all put the graft it, but they’re not going to punch holes in defences. It leaves teams not worrying about our middles and Salford especially tore us apart in that department. I’m sure Huddersfield will look to do exactly the same with the likes of Ikahihifo and Ta’ai. If we can’t stop them we’re in for another really long night.

With matches against Saints, Wigan and our old enemy up next, I think this is a must-win game, otherwise, we’re looking at six straight defeats.