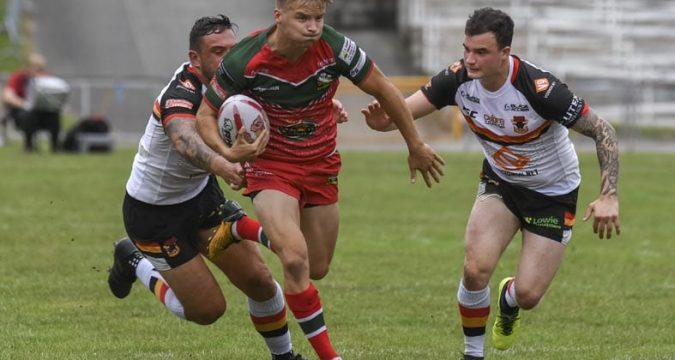 Joe Lyons is the latest player to commit his future to Widnes Vikings ahead of the 2019 season.

Lyons has been with the Vikings since the age of 14, joining at Scholarship level after playing his junior rugby with local community club, Moorfield ARLFC.

He progressed to captaining the club’s Academy side in the 2017 season, when he earned his first professional contract.

In 2018 Lyons played 16 games for the Vikings’ partner club, North Wales Crusaders on dual-registration in the Betfred League 1 competition.

Now 20, he made his first-team debut against Leeds Rhinos in this year’s Super 8s campaign, performing creditably against the reigning Super League champions and retaining his place in the side for the remaining games against Halifax RLFC, Toronto Wolfpack and Hull Kingston Rovers.

“I’m made up to be staying. Widnes is the only place that I want to play my rugby so it was a no-brainer for me,” said Lyons.

“Whilst from a club perspective, last year wasn’t great, I feel 2018 went well for me personally.

“My spell with Crusaders helped me to develop as a player and keep match fit for when I was given the chance at Widnes. It was a great honour for me to make my debut for my hometown club this year and then stay in the side for the back end of the Qualifiers.

“There’s a lot of young talent at the club that is coming through, and that’s why I wanted to stay, as I feel like we can do something with this group of lads.

“Widnes is a club that needs to be in Super League so I, along with the rest of the lads, will be doing everything we can to get promoted at the first attempt next year.”

Phil Finney, Performance Director at Widnes Vikings, says: “Joe is another one of our players who has progressed from our Academy system to the first-team squad.

“Joe has shown great dedication and determination since joining the club as a fourteen year old. He had a great year last year playing for North Wales Crusaders, which enabled him to earn his opportunity at senior level with us.

“We are all looking forward to seeing how Joe develops with another pre-season of training.”