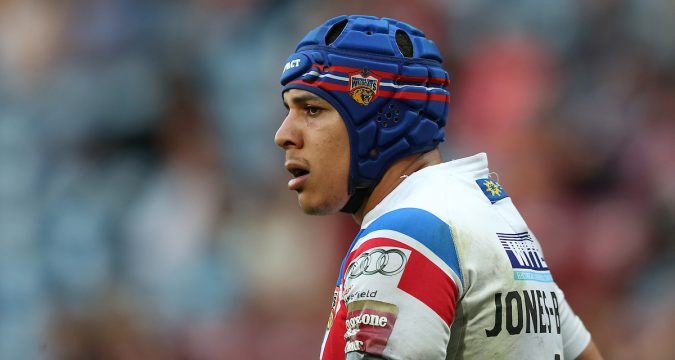 This story first appeared in Monday’s League Express. To ensure you get stories like this as soon as they’re published, click here to open your online subscription – for the price of a coffee! – to get the paper delivered to your smart device every Sunday night.

Wakefield Trinity have offered Ben Jones-Bishop the opportunity to become one of the club’s highest earners in 2018 in a bid to convince him to commit his long-term future to the club.

Jones-Bishop is one of several Trinity players out of contract at the end of this season. However, his impressive form this season has reportedly attracted interest from a number of other Super League clubs.

Jones-Bishop leads Wakefield’s try-scoring charts with ten Super League tries so far this season, and Trinity are keen to reward that form with a new contract. However, they face a battle to keep the 28-year-old beyond this season, with rivals circling the winger in a bid to pick him up on a free transfer.

Trinity officials are understood to have tabled a deal to Jones-Bishop and his management which would see him comfortably become Trinity’s highest earner moving forward.

Meanwhile, Trinity coach Chris Chester is hoping his side can emulate their Cup heroics of 12 months ago again this season as they moved into the last eight of the Challenge Cup over the weekend.

Wakefield were far too good for Championship strugglers Dewsbury, beating them 54-6 on Friday night to progress to the quarter-finals, where they now face a visit to Salford Red Devils. And Chester, who oversaw both Wakefield’s run to the last four in 2016 and Hull KR’s path to the final the previous year, believes the Cup can provide great momentum for his side once again.

He said: “We had a great run last year and there’s no reason we can’t do that again this year. “Our run to the semi-finals of the Challenge Cup gave the whole town a big lift last year. We want to do something very similar again this year.”

Trinity are understood to have also decided against offering a contract to utility forward Jon Molloy for 2018.

This story first appeared in Monday’s League Express. To ensure you get stories like this as soon as they’re published, click here to open your online subscription – for the price of a coffee! – to get the paper delivered to your smart device every Sunday night.