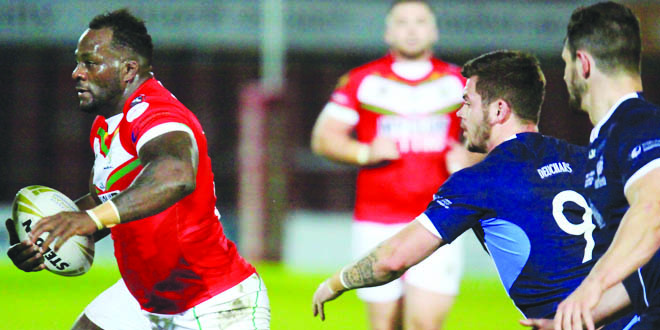 Holders Scotland were downed in the defence of their European Championship title as Wales registered their first triumph since 2010, winning 18-12 in Wrexham.

“In the first half we played a controlled, composed game.

“But the way we defended in the 15 minutes after half-time, that showed we have a team because we were under the cosh, tired and somehow managed to diffuse the Scottish attacks. I take great heart from that and I’m immensely proud of the players’ efforts.”

Victory for the Welsh meant an end to a run of a record 12 consecutive defeats.

A dangerous tackle on Davies gave Wales a penalty and he increased the lead to 8-0.

Scotland pulled a try back on 27 minutes when hard working Dale Ferguson left the Welsh defence standing, skipper Danny Brough – in his 19th international – adding the extras, but an excellent passing move and mazy run from Christiaan Roets set up Dalton Grant whose acrobatics gave him a try in the corner to extend the Welsh lead at the break.

After dominating the opening exchanges of the second period, Ferguson just held up, Scotland gave away a penalty 25 metres from their own line and Davies made no mistake with the kick to make it 14-6.

On 64 minutes, a terrific run from winger Williams enabled Ollie Olds to send Anthony Walker in for the decisive score, Scotland gaining consolation in the closing stages when Addy sent Oscar Thomas in for his first international try at the corner, Brough goaling from the touchline.

“I was impressed with Wales, I thought they fully deserved the win but I am obviously disappointed with our performance,” Scotland coach Steve McCormack said.

“They started the game a lot better, got out of their own half far too easily and punished us. They did the fundamentals and basics really well and when they had a chance they took it.

“There was only six points in the game so that is something we can take positives from. We came back well, had a chance of drawing but just couldn’t get the ball over the line. There were two or three times when we got held up and that is credit to Wales.”

A drop goal seven minutes from time by Hull KR hooker John Boudebza eased France home to a 31-14 win over Ireland in Albi.

Mark Aston’s Irishmen had shocked Les Tricolours in the European Championship last year with a win in Dublin and made the perfect start, Longhorns winger Casey Dunne going over in the 19th minute, Liam Finn converting.

France hit back, a kick to the corner by Remy Marginet saw Stanislas Robin take the ball and go over, too far out for Marginet to add the extras.

But right on the stroke of half time, a Finn penalty levelled at 8-all.

Five minutes into the second half, Catalans Dragons centre Tony Gigot intercepted for the first of his brace of touchdowns, strolling over for Marginet to put the hosts into a lead they never lost.

Soon after, new French skipper Theo Fages darted in by the posts, Marginet again on target as the Irish seemed to be tiring.

Aston’s men forced their way back into the contest in the 53rd minute, however, a Finn high kick being spilt and Brad Hargreaves on hand to dot down, Finn again on target with the boot to extend his record as Ireland’s top point scorer, taking his tally to 70.

Gigot showed the ball and went himself, scampering in from 60 metres and, two minutes from time, second-rower Kevin Larroyer crossed between the posts for France’s sixth try, Marginet with his third goal.

France coach Richard Agar commented, “It’s good to get to a win on the board to begin the competition, our combinations started to fire as the game went on. Full credit to Ireland, they just wouldn’t go away as is always the case with a Mark Aston coached side.

“We are building for the future, looking ahead to the next World Cup, but there is the core of a good group here and we are making progress.”