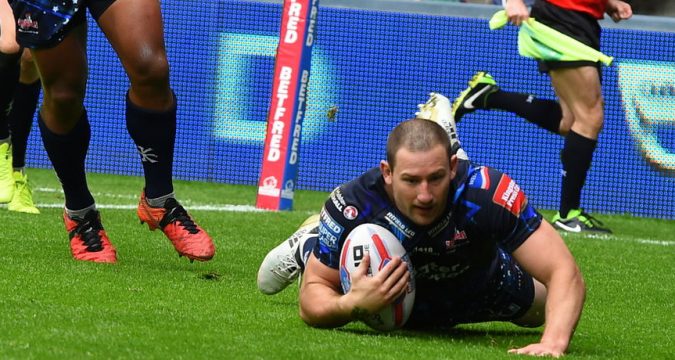 Warrington Wolves have made Mitch Brown their fifth signing ahead of 2018.

The 30-year-old has signed a one-year deal with the Wolves after his time with Leigh Centurions came to an end following their relegation.

Brown joined Leigh from Cronulla Sharks last year and made 26 appearances for the club.

“The culture I want to create is about players who are team first and willing to work extremely hard,” said head coach Steve Price.

“Having been involved with Mitch at Cronulla he certainly ticks those boxes. He’s an outstanding quality person and will add a lot to the club culture which we are building.

“He understands the systems which I am implementing here at the Wolves and he knows that there are positions up for grabs in the wing spots and no places are guaranteed as it will all come down to how each performs in pre-season and the friendlies.

“He’s known for finishing tries off and understands the game well. He’ll be a great acquisition for the Wolves.”

Brown added: “Warrington’s a power club in the Super League and they have a great team for next year. They had a good base to start with, have recruited strong and with Pricey (Steve Price) coming over it’s a good opportunity.

“I like the way Pricey coaches, the way he structures things, and he’s a good person off the field as well. Hopefully he’ll bring a good culture to Warrington too.

“It’s always hard going to a new team, meeting new faces, but there will be a lot of boys in the same boat even the coach here. I know Bryson pretty well and have been coached by Pricey before so that will help. There are the same personalities just different faces in every team, and everyone is always very welcoming.

“The style of play in Super League is different to back home, certain aspects are tougher, the conditions for one; the first game I played was at Cas and it was snowing so a bit different to a first game back home. It’s very expansive football, the ball gets moved around a lot more over here and I like that. I hope to score a few meat pies (tries) and put in some strong runs and carries. I’m very much a team man.

“There have been a lot of class players play here, a lot of greats, so it will be very exciting pulling on the jersey and running out at The Halliwell Jones Stadium.”