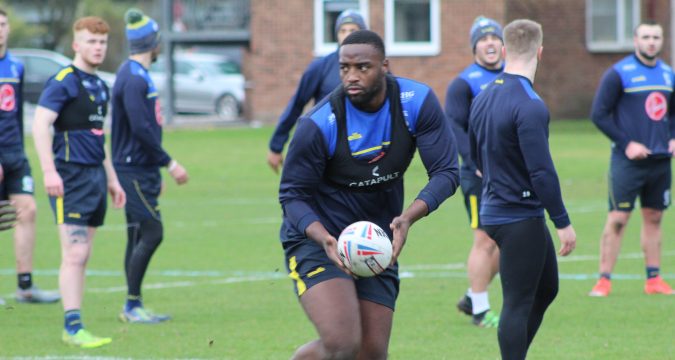 It’s not difficult to spot Samy Kibula. If you’ve seen any of Wigan’s academy games in the past 18 months – or even the odd Championship game – you’ll have definitely noticed the enormous 20-year-old towering over many of his colleagues. But you might not know what it’s taken for Warrington’s new signing to get to this point.

Most professional sportsmen owe plenty to their parents. The long nights driving them to training sessions after work, the endless sacrifices to help aspiring young professionals realise their dreams. But when Kibula was just a toddler, his parents decided to make the ultimate sacrifice to ensure their children could make the most of life.

Kibula’s thick north-west accent does little to tell the story of how when he was just two, his parents left behind the city of Kinshasa and the Democratic Republic of Congo to move to Wigan. “I don’t remember too much about life there, to be honest,” Kibula explains as he begins to recall his journey.

“There were just three of us – me, my mum and dad – when we left DR Congo. They didn’t know too much about what they were coming over to, and they certainly didn’t know anything about what was awaiting them. It’s been tough, especially for my parents at times, but we’re surviving and we’re all happy.”

Kibula was first exposed to rugby league as a young child. His family initially moved to Wigan before settling in Tyldesley, where they still reside, along with Samy’s two brothers: who include 16-year-old Ambrose, another player on Warrington’s books. “I think my parents just wanted a better future for me and my brothers when they decided to come to England,” Kibula claims.

“I just went down to a random training session as school and really enjoyed it, and ended up at Leigh Miners. I played rugby union for Tyldesley at the same time too – I genuinely didn’t know there were two codes of rugby!” Naturally-gifted at both codes, and always one of the biggest players on the field – which is no surprise if you see him now – Kibula quickly found himself with a decision to make.

“It was Wigan or Sale,” he says. “In the end, I opted for league because I enjoyed it all, but I can’t forget what role my parents played in getting me that far. They work really hard and take us training whenever they can, and I’m just trying to pay them back. My dad works nights and he’d take me to school, run me and my brothers to rugby training and he just doesn’t want us to struggle how they did back in DR Congo.

“We’re privileged to have them sacrifice so much for us. We don’t speak too much about what life was like for my parents in DR Congo, but my dad has told me that you certainly wouldn’t want to go back there. That inspires me to work as hard as possible to get a better future for my parents.”

There have been bumps in the road along the way for Kibula, though. He was tipped to break into the first-team at Wigan at some stage – something which ultimately didn’t materialise despite one appearance under Shaun Wane in 2018. 2019 then saw him spend time out at clubs such as Dewsbury and Swinton: which for Kibula, who had always been seen as a star of the future, was tough to take.

“It’s been a really hard 12 months, especially all the travelling to games on loan and dual-reg,” he reveals. “It tires you out and it can be hard to get yourself up for those games, but I learned at the end of last season that if I play well wherever I might get a first-team shot. That’s been a big part of my learning process for sure and I’m aware of the importance of it now.”

The move to Warrington is a fresh start for Kibula, after his progress stalled at the Warriors. It is another opportunity for him to crack Super League and become a top-flight player – and there is certainly no shortage of motivation for him, given who will be in the stands on the night he does become a Super League player with Warrington for the first time.

“I’m very lucky to have such an incredible family behind me,” he admits. “My parents were really proud when I signed at Wigan, and I’m sure it’ll be the same if and when that debut comes around. It was the right time to leave Wigan and move on.. this is a great opportunity for me now. I’ll never forget what my parents sacrificed to give me this chance in life – and I’m just trying to pay them back like anyone would.”