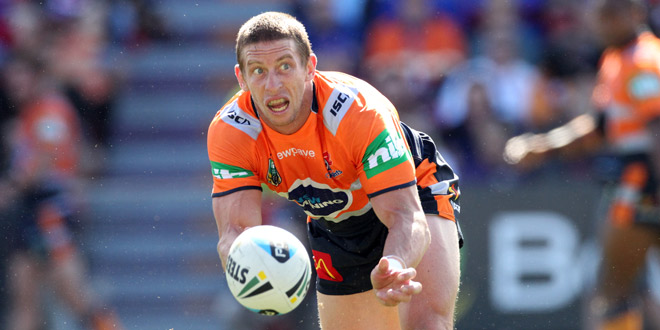 Knights’ skipper Gidley, 32, has signed on a one-year deal having previously been a one-club man in his professional career with 15 years at Newcastle.

Renowned for his experience and appearances at fullback and in the halves Gidley made his first grade debut for the Knights back in 2001 against St George Illawarra Dragons having spent his junior days at Wests Newcastle. He’s since gone on to make over 230 NRL appearances.

Throughout his career to date he has also achieved numerous honours including representing the Kangaroos on 12 occasions and playing 12 games for the NSW Blues.

On signing for the club Gidley said: “I’m really excited. My brother went to St Helens for four years and had a great time playing in the Super League, and Danny Buderus has been to Leeds and played for three years. They came back with glowing reports of playing in the Super League and of experiencing a different culture, that was certainly a big factor for me. I’m excited to be going to a strong club and to challenge myself and experience different fans and team-mates.

“My family is really excited as well. I’ve got two young girls so to see them experience something different as well before they start school is going to be fun and exciting.

“One of Newcastle’s greats Andrew Johns played at Warrington and he’s given it a massive rap – their fans, the facilities and how stable the club is. Matty King is another good guy who I have spoken to about Warrington. They both had great reports on the club so I’m excited to challenge myself, play well, train hard and hopefully see if I can leave a legacy there.

“You’ve got to prove yourself again which is something I’m looking forward to. I’ve experienced a lot and am proud of my NRL career over in Australia but to go over and start afresh and earn the respect of my team-mates, club and fans is something I am looking forward to. It’s going to be a great new challenge and hopefully I’ll be a successful player and part of a successful team.”

Head of coaching and rugby Tony Smith added: “Kurt’s been an extremely committed player to one club over his career, and we like the fact that he has been loyal. He will bring some of the big-game experience that he has been involved in for a number of years and we are delighted to be bringing some more experience in, particularly into our backline to help guide us around. He’s got a great sense of Rugby League and when to do what. Kurt’s a very good decision-maker and we need some of that in amongst our already talented backline. He’s an extremely professional player who has looked after himself for many years and is well known for doing everything right both on and off the field. People who have played with him and coached him speak very highly of him in terms of professionalism and his focus on the team. He’s very much a team player.”

Roger Draper, Wolves’ chief executive, said: “At Warrington Wolves our aim is to become one of the leading Rugby League club’s in the world both on and off the pitch. Signing a player of Kurt’s calibre is a clear indication of this ambition as his experience will enhance our squad and help our team continue to deliver on-field success.”