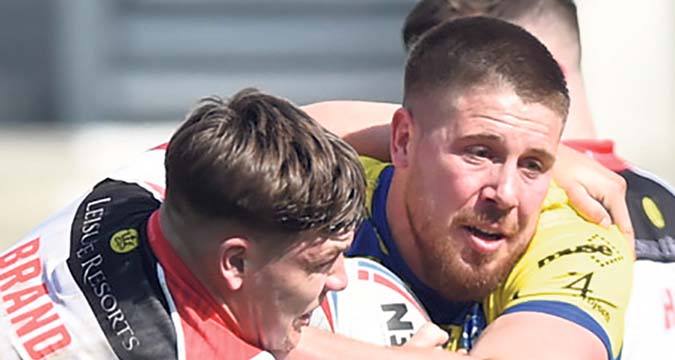 Tom Lineham hailed his team-mates after scoring two tries to help Warrington to a first win of the season on Friday.

Toby King and Gareth Widdop also claimed doubles as the Wolves bounced back from their 21-12 Super League defeat by Castleford with a 44-12 victory over Leigh.

Ben Currie and Jake Mamo also got on the scoresheet for Steve Price’s side.

Pundits have long praised the Wolves’ attacking edge, and winger Lineham said: “You’ve got a master in Gaz Widdop, while Ben Currie is class and, of late, Toby King has been the main man.

“Just stick me on the end and I’ll try my best!”

The 28-year-old former York and Hull player, who has been at Warrington since 2016, admitted: “We didn’t turn up against Castleford.

“We didn’t do the tough stuff, we let ourselves down and we were beaten by the better side.

“We worked hard during the week to rectify a few things, and this was a great response.”

Coach Price said: “I thought it was a big improvement from the week before, a totally different performance, which was pleasing.

“The start to the game was a lot better and the defence was a lot stronger as well.

“I thought my left side looked really potent and the right side showed a big improvement.

“Leigh have got some big lads like Nathaniel Peteru and Adam Sidlow and Liam Hood likes to play on the back of that.

“But when you complete at 78 per cent, you’re always going to score tries.

“I thought it was a fantastic display and we want to keep improving as a group.”

Price was particularly impressed by halfback Widdop, adding: “Was that Gareth’s best performance for the club? You could say that.

“He will be a really good asset to us moving forward.”