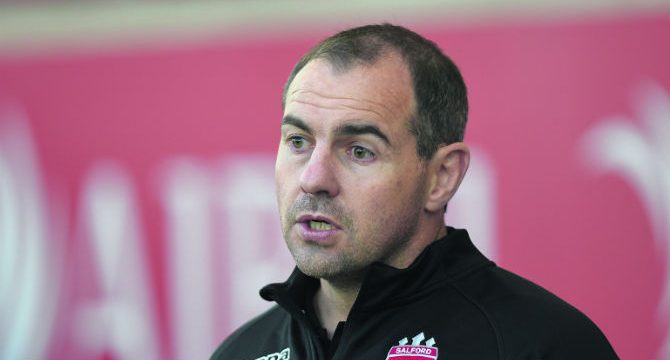 Salford head coach Ian Watson has criticised the proposal to increase the number of interchanges.

Watson believes that increasing the interchanges from eight to ten would be a waste of time and he says he has told his coaching peers as such.

However, Watson has suggested taking heed of a proposal from Sky pundit Barrie McDermott, which would allow coaches to call upon their 18th and 19th players if they suffer a game-ending injury to a player.

When asked about increasing the number of interchanges Watson lamented: “I think it’s ridiculous to even suggest it.

“I’ve made my feelings clear. It’s a no-go for me. You bring a rule in to speed the game up and make it more attacking and attractive and now you want to increase interchanges? It changes the game again and if we’re going to play these rules next year, what’s the point of changing it now?

“I think the one thing that makes sense to me, and I put it in the coach’s group chat, is an idea from Barrie Mac. He’s saying something about the 18th & 19th man being available to you if you lost a player through a game-ending injury or really bad concussion.

“I think that makes brilliant sense, but to increase the interchanges is not the right thing to do.

“We’re trying to make a faster, more attractive game, but by increasing the interchanges I could just keep rolling players and they’re going to be fresh and you’re going to go back to it being as it was, just having the big players coming on and off.

“We should either have stuck with the same rules at the beginning or, now we’ve got to this point, we should not look at changing them, because we’re wanting to play by these rules next year and it gives us a chance to have a really good look at it. Maybe using the 18th or 19th man is smarter.”

He continued: “It’s a situation now where it’s about the game growing and getting people interested again. If you keep messing about you become a laughing stock. So I just wouldn’t do it because I think it would be detrimental to our sport.”