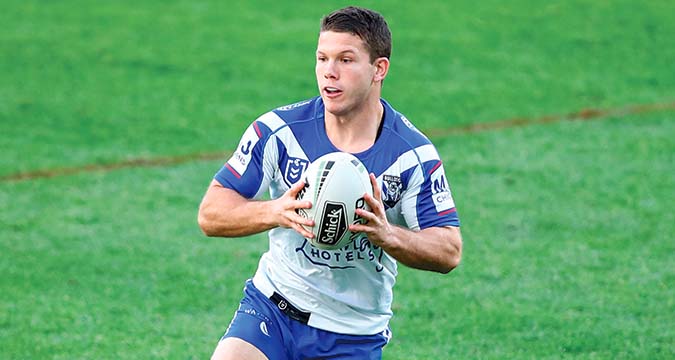 Huddersfield Giants have completed the signing of halfback Jack Cogger.

The 23-year-old has signed a two-year deal with the club and becomes the first player signed by new Giants coach Ian Watson.

Cogger, a New South Wales representative at junior levels, has made 42 NRL appearances for Newcastle Knights and Canterbury Bulldogs.

“Jack Cogger gives us great competition in the spine of the team,” said Watson.

“He’s a no-nonsense rugby player with a great kicking game and a level of experience at the NRL level with Newcastle and Canterbury and he’s played with top quality players, so coming alongside Lee Gaskell and Aidan Sezer, he’ll be used to playing with top quality. He adds to the strength in depth and the quality we have here at Huddersfield.

“He gives us competition for the starting spot alongside Gaskell and Sezer, and he’ll make those players accountable and force them to play at the right levels. He’s played halfback and played nine. He’s tough and he doesn’t mind getting stuck in, so I think he’ll suit the English style.

“Jack is a great addition because of the quality of player he is. You don’t get to be captain of the Aussie Schoolboys without being a decent player; his ability and professionalism will help push Huddersfield to a different level on and off the field. We want people who are professional and accountable.”

Cogger added: “It’s a really good opportunity at a time in my career when I need high level consistent football and I think Huddersfield can offer that. I spoke to Ian Watson and he’s filled me with confidence that it was going to be the right place to further my game.

“Also the opportunity to play with Aidan Sezer, an experienced half, was a big one for me and I think the style of play will suit me and what I want to do on the field. The team that’s being built here is going in the right direction for a really good year.”