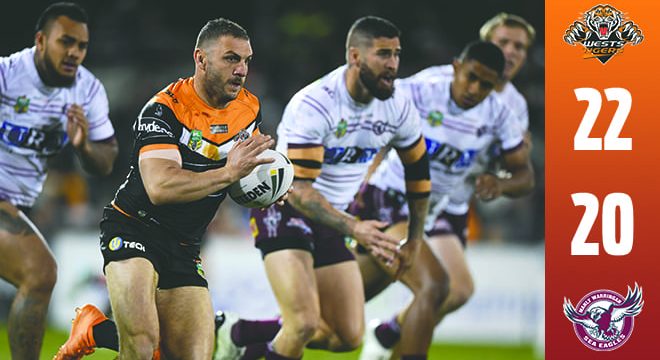 Wests Tigers kept their faint hope of a playoff spot alive after hanging on to beat Manly Sea Eagles 22-20.

Manly struck first when Daly Cherry-Evans dummied through the line and carried Esan Marsters over the line.

Wests deservedly levelled with nine minutes left before the break. Mahe Fonua offloaded well to Kevin Naiqama. But Cherry-Evans slotted a penalty after the hooter to give Manly the lead at the interval.

Wests took the lead for the first time when Robbie Farah kicked in behind for Chris Lawrence. Then, off the next set, Alex Twal broke up-field, stepped Tom Trobjovic and timed his pass perfectly to Moses Mbye.

The Tigers scored again when their playmakers combined to send Naiqama in for his second.

Now finding themselves down by 14, Manly replied through Trent Hodkinson. Then Cherry-Evans’ second try cut the deficit down to just two points.

Cherry-Evans had the chance to send the game to golden point but his attempt from the sideline, 48 metres out, fell just short.