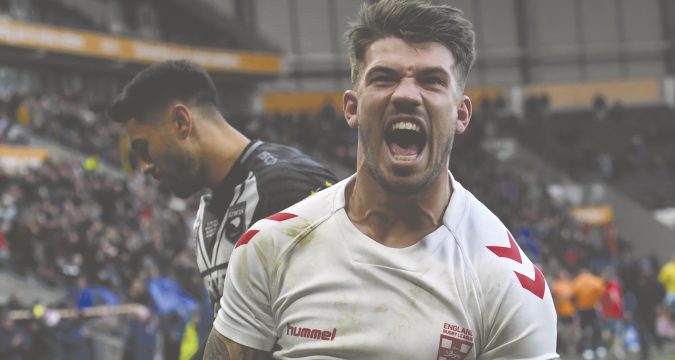 Wests Tigers have signed England and Great Britain international Oliver Gildart for the start of the 2022 NRL season.

A product of Wigan’s youth system, Gildart made his Super League debut while on loan for Salford in 2015 before returning to the Warriors later that year. He featured in consecutive Grand Finals in the ensuing two seasons, clinching the 2016 title as well as the 2017 World Cup Challenge, before being named the Super League Young Player of the Year in 2017.

Selected to make his international debut for England in 2018, the 24-year-old Gildart will join Wests Tigers with three Tests caps to his name and a try-scoring record of 61 tries in his 129 career games for Wigan Warriors.

“Oliver is coming from a very strong and successful club in Wigan and has already played in a number of big matches throughout his career,” Maguire said.

“We’re looking forward to him bringing his experience and talents to our squad in 2022 and watching him take the next step forward in his Rugby League career in a Wests Tigers jersey.”

“On behalf of all at Wests Tigers, I’d like to say how pleased we are to welcome Oliver to our squad,” Pascoe said.

“Oliver is clearly a talented footballer who has played at an international and representative level already in his career, and we are looking forward to watching him improve further in the NRL at Wests Tigers.”

Wigan Warriors executive director, Kris Radlinski, said: “Oliver has made it clear for a number of years that he has an NRL ambition. He has honoured his contact and has served the Club and the town tremendously well.

“Young players come to us at 14 years of age and you watch them transition into men. The development journey takes you through many highs and lows and there is always a sense of pride when they achieve their goals.

“Oliver should be very proud of what he has achieved at Wigan and in Super League. We wish him well in the next stages of his career and life.”

Gildart said: “I’ve been living my childhood dream playing for my hometown club since the age of 11.

“I’ll never forget my debut try against Warrington and of course, it doesn’t get much better than playing in front of a packed Old Trafford and scoring a try in a Grand Final win.

“I’ve had the privilege of being surrounded by legends year in year out at this Club who have helped me become the person l am today.

“However, it’s been no secret that I’ve wanted to challenge myself over in Australia. When Michael Maguire and his team showed interest, it became clear that Wests Tigers is where I want to be in the next stage of my career.

“I owe a lot of credit to my dad, Bill Ashurst and Alan Rimmer for pushing me on in my amateur days at Wigan St Pats.

“And a massive thanks to the fans. You have been outstanding through thick and thin. We can’t wait to have you back in the stands.

“With that said, there is unfinished business to take care of for Wigan this season.

“My priority is to get back to playing my best rugby in Cherry and White and finish the season off with another Grand Final ring in front of the fans.”