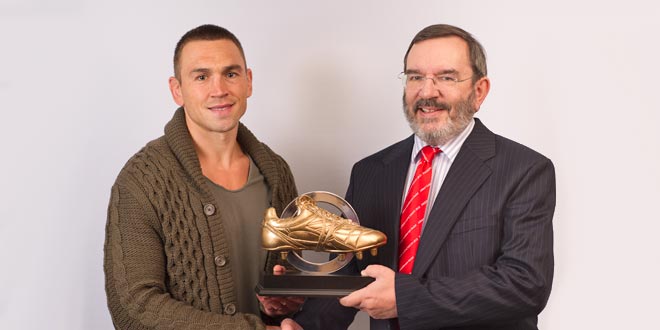 The New Year is almost upon us, and you can begin to warm up for the new season with the January edition of Rugby League World, which goes on sale this Friday.

And this particular edition is always a special one, as it will reveal the winner of the 2014 Golden Boot. With a shortlist including names like Burgess, Bromwich, Inglis and Johnson, there’s plenty of competition for the coveted prize. As well as that, the 2014 World XIII will also be revealed.

And as well as the usual mix of high quality Rugby League chat from all across the globe, this month there’s even a chance for you to get your hands on some special prizes.

Warrington Wolves fans won’t want to miss out on the opportunity to win one of their new replica shirts for 2015 – and you can do so by entering our exclusive competition in this month’s edition of the magazine. As well as that, there are copies of the League Express Rugby League Yearbook up for grabs – a perfect post-Christmas present for any Rugby League fan in your life; whether it’s family, friends or even yourself!

And aside from the competitions and prizes, there’s all of this, too:

Plus there’s all the regular columns from all around the world, including leading opinion from the likes of Dave Hadfield and Steve Mascord.

It’s available to purchase from Friday 19 December – or if you really can’t wait, get your hands on the digital edition from Thursday evening.

Who will be the Golden Boot winner of 2014? There’s only one way to find out – get your copy of Rugby League World.