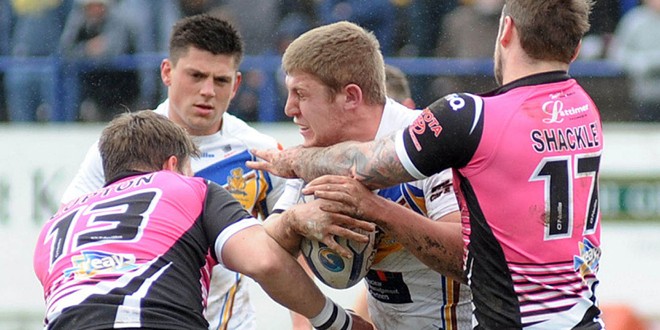 The Rugby Football League (RFL) has announced it is to review the state of the game in West Cumbria – a wide-ranging investigation that could potentially look at merging Championship clubs Workington and Whitehaven to create a side worthy of joining Super League.

In a statement, the RFL said: “The review follows on from the success of Rugby League World Cup 2013, during which more than 14,000 people attended matches at Workington’s Derwent Park stadium, and will focus on the sustainability of professional Rugby League in West Cumbria, as well as looking at the player pathway and development opportunities from within the community game.

“The study will be led by consultant Alan Rapley who was the 1996 GB Olympic swimming team captain and has also been a swimming coach to numerous Olympic swimmers. Rapley now runs his own consultancy which ‘coaches coaches’, his clients include the England Rugby League team along with numerous sports clubs and governing bodies.

“Fans of Whitehaven and Workington, those involved in the community game and anyone with an active interest in the sport in the region will be encouraged to have their say as part of the consultation process, the findings from which will be published later this year.

“Crowds of over 7,000 attended both the Scotland v Tonga and Scotland v Italy matches at Derwent Park last October and November as part of the most successful Rugby League World Cup of all time. Representatives of both West Cumbria clubs are keen to explore the opportunities presented by the positive impact the tournament had on the region.”

Barry Richardson, Whitehaven CEO, said: “We welcome the plans for an independent review in support of the future of the game in West Cumbria. The Rugby League World Cup demonstrated to everyone that there is a far greater potential for the sport at a higher level in the region than is being realised currently.

“We would like to look at how we can capitalise on the success of the tournament and also examine how the game can be taken forward.”

Dave Bowden, Strategic Development Manager of Workington Town said: “The success of RLWC2013 has stimulated the thoughts of key stakeholders across West Cumbria, and we are excited about the opportunities the legacy of the tournament presents.

“We welcome the study and look forward to what we anticipate will be a full, frank and open debate on how everyone involved can progress the sport in a region which has so much potential for growth.”

RFL Director of Standards and Licensing Blake Solly said: “There are some significant opportunities to grow the game in West Cumbria, as well as some challenges that need careful consideration.

“We believe this independent review will stimulate honest and constructive dialogue across the region and allow everyone involved in Rugby League in West Cumbria to realise the sport’s potential.

“Whitehaven and Workington Town should be congratulated on their proactive approach to this project which we hope will have far-reaching outcomes.”

Alan Rapley said: “The study will be undertaken in four phases with the second phase including a comprehensive consultation exercise which will give people the opportunity to have their say on the state of the game in the region.

“The report will be finalised later this year and will make recommendations for future progress.”