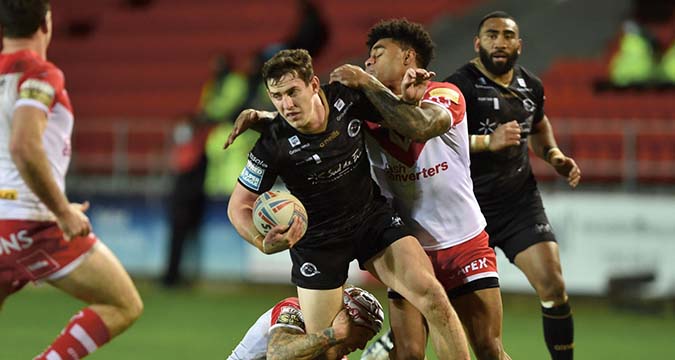 Matt Whitley may be an England Knight but it’s the sunny days in France that have put a spring in his step.

The 24-year-old former Widnes Vikings second rower has just signed a new two-year deal with Catalans Dragons and he’s in a good place.

“The club is heading in the right direction and I’m looking forward to being a part of this group of players and staff for another two years. After reaching the semi-finals in 2020, I’m looking to push on this next season to win something for this great club.”

Whitley has settled into the French lifestyle with his partner Georgia and 18-month-old daughter Emilia and is enjoying the challenge of a new culture, cuisine and language far from his family roots in Billinge, where he spent much of his childhood on the terraces of Knowsley Road supporting St Helens.

“I’m still working on my French,” he said with a wry smile.

“But the rest of it is really nice. The climate and scenery down here are incredible, but it’s the people that make it, they’ve been so friendly and welcoming to us.”

Whitley has won over French supporters at Stade Gilbert Brutus with a string of man-of-the-match performances from second row or centre, scoring eight tries in just 14 games during his second season in blood and gold.

The impact of Covid hit the Dragons hard, with the financial and logistical challenge of travelling in a bio-secure environment, but Whitley feels the unique challenges of 2020 have boosted team spirit in Perpignan.

“We can’t sit around whingeing about the fixtures or the fact we’re travelling to England almost every week,” he said.

“It’s been an unbelievable year where anything could happen at any moment.

“We had to keep our focus on week to week, training and the games, not looking too far ahead. All the time we had that confidence in ourselves and our ability to win enough games to get us in that top four.”

Whitley admitted the stop-start nature of the season had taken its toll, adding: “As players we’ve probably never had such long periods of time not training or playing since we were little.

“But we’ve got to be grateful that we’ve still got jobs. There are a lot of people that have lost their livelihoods because of Covid, so we’re very lucky. I still feel lucky that I’m able to play the game I love and class it as my job.”

Whitley is also grateful for the learning curve he has experienced in the south of France. He said: “I’d like to think I’ve improved as a player since I’ve been at Catalans and that’s probably down to the coaching I’ve had from Steve (McNamara) and being around some more experienced players like Sam Tomkins and Greg Bird.

“You pick a little bit up from everyone. We’ve all got something to offer, but the ones like James Maloney who have been at the very top of the game in the NRL and State of Origin, they have been there and done it all, so it’s really beneficial to be around them.

“I’ve learned an awful lot and I feel stronger physically. I’m a bit heavier and a bit leaner than what I was before I came to France, I’ve just got to try and stay away from the baguettes; you get then with every meal over here.”

Coach McNamara is delighted to have secured Whitley for two more years, he said: “Matt has progressed and matured significantly in his two seasons in France.

“He and his family have settled incredibly well. His performances have been consistently good and we look forward to him having a growing influence within the team.”