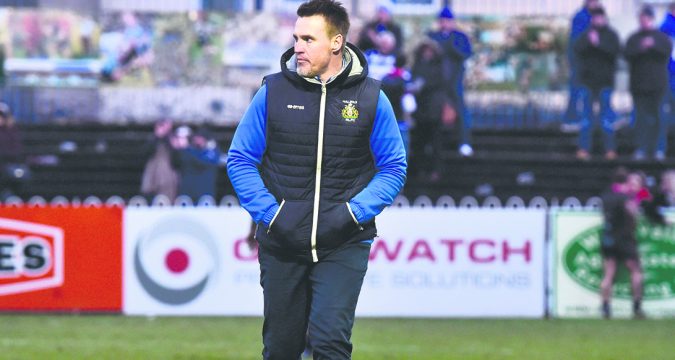 There’s no way of sugar-coating it. Last week was a horrendous one for Halifax.

Dumped out of the Challenge Cup by lower league opposition on Tuesday, Fax backed that up by being comprehensively defeated in France by high-flying Toulouse.

It was a damaging few days for Richard Marshall’s side, who missed out on a money-spinning tie at home to Hull Kingston Rovers and are now five points adrift of the top four having already lost to three of the sides currently occupying places in the top four.

Fax fans have wasted no time venting their frustrations about the current situation, with a flurry of criticism aimed at Marshall for fielding a weakened side that ultimately came up short against the Roughyeds.

But, while there is some validity to those claims, there is a very urgent need for perspective.

Marshall has made little secret of the fact that reaching the top four for a second consecutive year is Fax’s ultimate goal, and last week left him in a very difficult position.

With their Challenge Cup game against Oldham postponed at the weekend, the game was moved to Tuesday, just four days before their trip out to face a Toulouse side that had a two-week turnaround going into the contest due to their decision to pull out of this year’s cup competition.

With that in mind, Marshall left out a lot of his senior pros and gave some of the club’s up-and-coming reserve grade players an opportunity to impress. They ultimately came unstuck, which resulted in criticisms aimed at Marshall’s team selection, but in reality, he was left with little other choice. Fielding his strongest team possible would have damaged the side’s hopes of winning in France, which was ultimately the more important game of the two.

Their defeat to Toulouse ensured his calculated risk backfired in the worst way possible, but it’s hard to argue with Marshall’s thinking, even if the performances left a lot to be desired.

Ultimately, the Fax chief is quickly becoming a victim of his own success.

Many of the club’s fans won’t want to hear it, some will even reject it altogether, but during Marshall’s three years in charge they have punched well above their weight, and the sooner that’s accepted, the better.

Despite working with a significantly smaller budget than those around them, Fax have defied the odds twice to finish in the top four, finishing above full-time teams on both occasions.

During that time, Marshall has integrated a number of players from the club’s reserve grade into the first-team setup and he used Tuesday’s rearranged fixture as an opportunity to provide a pathway for others. Even though that decision looked unwise in the aftermath, it was a choice more out of necessity with the Toulouse fixture in mind.

Halifax fans have every right to be concerned about the season ahead. Their lack of creativity with the ball has been found out against the top sides in the Championship, a fact that’s all too apparent given they’ve managed to score just one try in each of their games against Featherstone, Toronto and Toulouse. Even at this stage, their top four hopes look bleak as they sit five points adrift.

But a dose of reality is needed before blaming a coach who, it should be noted, has found a way to guide Fax into the top four from far more problematic positions than this.

Either way, Marshall should be cut some slack.