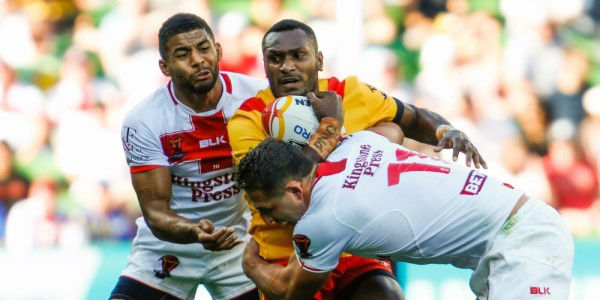 The Kumuls ace was an ever-present in the World Cup scoring once during the competition.

An outside back, Ottio enjoyed an outstanding season domestically, winner the winger of the year award in the NSW Cup after scoring an incredible 29 tries in 23 games for Canberra’s feeder side, Intrust Super Premiership side, the Mounties.

The 23-year-old’s move is subject to visa approval but promises to be a shrewd addition to Denis Betts’ squad, who has already bolstered his backline with the arrival of Krisnan Inu.

Billed as 6’4 in 105kg, the Vikings beat off stiff competition to land the services of the PNG ace.

“Kato is a fantastic signing who we are delighted to welcome to Widnes Vikings,” Betts said.

“He is a big outside back, with World Cup experience. I am excited by the quality that he will add to our edges. He is relishing his opportunity to play in the Super League, and is looking to make a big impression at Widnes Vikings.”

“Kato is a player whose qualities we have seen during the World Cup. I have also spoken to several people in the NRL and connected to Canberra Raiders during my time at the tournament, who rate him very highly. It is exciting for us to follow the recent signing of Krisnan Inu with another talented outside back, who will add competition and quality to the team.”