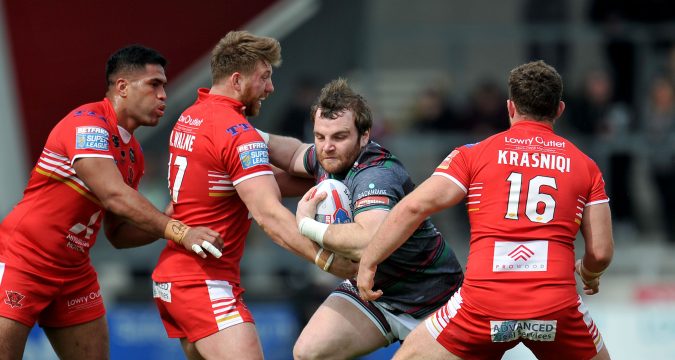 Widnes Vikings forward Greg Burke is determined to repay the club after a turbulent year.

A troublesome ankle problem hindered the prop all year, which resulted in a loss of form.

The 24-year-old admitted he felt like he had let his team-mates down last year as he struggled to deliver on the field during a period when the team was struggling for results.

However, with the club avoiding relegation and Burke now back to full fitness, he is ready to make amends this year.

“I had an injury that hindered everything,” Burke told League Express.

“It restricted my pre-season so I couldn’t get myself right and then once I got back playing I couldn’t give my best.

“It hurt me personally, because you don’t want to feel like you’re letting the team down and at times I felt I was.

“It wasn’t a case of not trying; I needed to fix my body but we needed men to play.

“But I’ve had my ankle done now and I’ve been able to train a lot. So it’s a case of showing my best form this year and paying the boys back.”

Last year’s injury problems resulted in a lot of the club’s younger players getting valuable first-grade experience, and the former Wigan forward believes that will provide the Vikings with more competition for places this season.

“Last year we had a lot of injuries and the young lads were thrust in,” he said.

“They got games when maybe, if we’d had a healthier squad, they wouldn’t have, because they’re still young and probably weren’t ready for those games.

“But they’ve had another extra year and they’re going to be competing. It’s up to us older lads to keep them out and that’s healthy.

“We don’t want another year like last year and having that competition will help.”