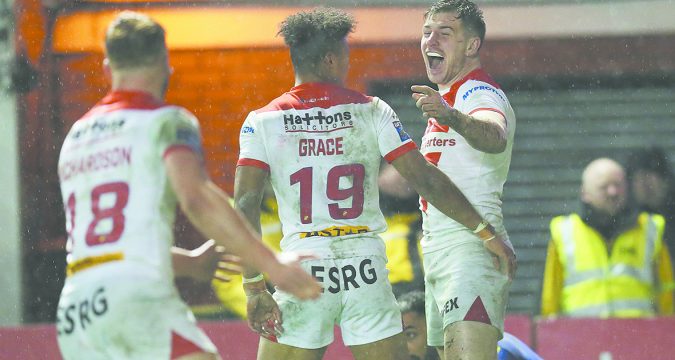 St Helens proved to be too strong for a gallant Widnes Vikings side, earning a comfortable 38-18 victory although the Vikings contributed their part to an entertaining game in the sunshine.

The Vikings started the game badly, when Stefan Marsh put the ball out on the full from the kick-off.

But they struck the first blow, when Matt Whitley crossed from close range after charging onto a pass from Jordan Johnstone. Marsh’s goal gave Widnes a 6-0 lead.

But Saints hit back when Danny Richardson supported a Dominique Peyroux break to touch down and then Mark Percival touched down after a Ben Barba kick into the defence. Referee Liam Moore went to the video referee recommending no try, but the video referee reversed the decision for St Helens to take a 12-6 lead.

And they scored six further points when Regan Grace touched down on 19 minutes.

The Vikings replied, however, with a Wellington Albert try as he charged onto another great pass near the line from Johnstone.

Ben Barba then glided over the line to extend St Helens’ lead to 28-18, but the Vikings had the last say in the first half when Jimmy Keinhorst crashed over after some great passing with Joe Mellor prominent in the move.

The second half began with a Richardson penalty for St Helens before Ryan Morgan scored two unconverted tries to put the league leaders 32-18 ahead. The first of them came after brilliant footwork from Mark Percival and will be a contender as the League Express Try of the Week.

Johnstone was denied a try for Widnes because of obstruction before Grace touched down for his second after picking up a loose ball to run 60 metres to touch down.