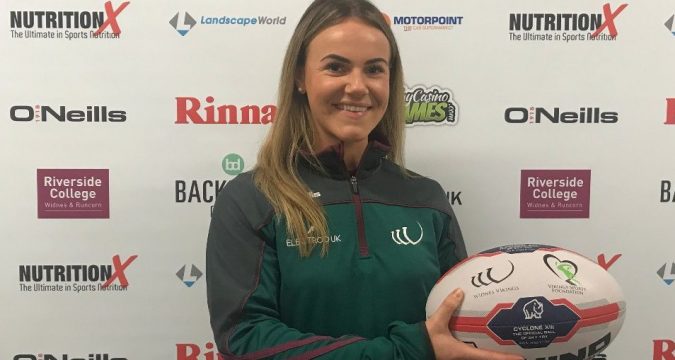 Widnes Vikings have revealed that they plan on becoming the latest side to create a Women’s Super League team.

The Vikings, in partnership with the Vikings Sports Foundation, are spearheading plans to encourage increased engagement in the game, by delivering innovative programmes that support girls as young as seven to participate in the sport – and at the heart of it is the formation of a new Widnes Vikings Ladies team that will compete in the 2018 Women’s Super League.

Richard Munson, Commercial and Community Director at Widnes Vikings, said: “In the last two years, the Vikings Sport Foundation has enabled over 3,000 girls in primary and secondary education to participate Rugby League, as part of our delivery of the Sky Try programme. With the support of Merseyside Sports Partnership, twenty girls also participate in a weekly training session that we provide at the stadium.”

“The creation of a Women’s Super League team takes this effort to another level. Widnes Vikings Ladies will provide fantastic opportunities for people who currently play the game, as well as a clear route for younger girls to realise their ambition of representing the Vikings in the Women’s Super League in the future’’.

The Women’s Super League was established last year as the elite competition for Women’s Rugby League. It supports the development of a national performance pathway that spans from school Rugby League through to participation in the 2021 Rugby League World Cup.

The Vikings are currently welcoming expressions of interest from prospective players with trial sessions due to kick off next month. The open-age team will be trained by coaches from the Vikings’ award-winning community team, with players having the exciting opportunity to both play and train at Halton Stadium. Whilst the team will be led by the Vikings Sports Foundation, players will benefit from regular access to the Vikings performance gym and first team coaches and conditioners.

“The new Women’s Super League team is just one part of a much bigger effort,” Munson continued. “We want to create as many opportunities as possible for girls and women to participate in Rugby League, so they can meet new friends, play competitively, and benefit from everything the sport brings. Building on the success of national campaigns like ‘This Girl Can’, we want to ensure that there are suitable playing opportunities locally.”

“On a Friday evening, we deliver ‘Future Stars’, a programme supported by Halton Clinical Commissioning Group that provides a perfect introduction to the sport to girls and boys in primary school. At secondary age, we are focusing our efforts upon four local schools, who will become our girls’ Rugby League development centres and receive additional coaching opportunities. On a community front, our session with Merseyside Sports Partnership will continue for girls in years 7 – 9 at school, whilst the newly formed Girls Development Squad will ensure girls in years 9 – 11 have the chance to play regularly. We are very excited by this pathway.”

Widnes chief executive James Rule said: “We are proud to be at the forefront of efforts to grow the women’s game, with the formation of our first Women’s Super League team. At Widnes Vikings, we live by a ‘One Club’ philosophy. This team is another example of us bringing this philosophy to life, through creating exciting new opportunities for local people and inviting the community play an active role in our Club.”