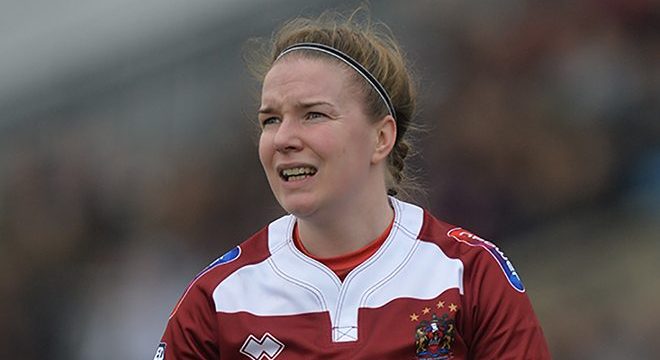 The Women’s Super League sees another first this weekend as Wigan and St Helens go head to head in their debut derby on Sunday.

While Wigan winger Michelle Davis, might be new to the game and Wigan, she has already been educated in what these sort of games means to both clubs.

“I have only been watching Rugby League for a few years and might not be from Wigan, but I know how important these games are to the club,” said Merseyside-born Davis, who works at a law firm in St Helens.

“My other half and I went to the derby on Good Friday and the atmosphere was great. I could see how much derby day means to everyone involved and I can’t wait to be a part of that.

“Even though we’re making history being involved in the first Women’s derby between the sides, the history of the game is still there so it is just as important for us as it is for anyone else and we have to respect that.

“It’s been great fun in work as well because I am really experiencing the banter that goes along with any Wigan v St Helens game.

“I had to go up to accounts during the week to put an invoice in and my colleagues up there are Saints fans who know about the game this weekend so they were giving me a bit of stick, but it’s all been good fun.

“I know it’s going to be a tough game. Saints are unbeaten so it’s a huge challenge and we know how well they can play. But we also know how well we can play so if put everything together we’re confident we can go out there and get the win.”

The game kicks off at Robin Park Arena at 1pm, whilst elsewhere another derby takes place when Featherstone Rovers host Castleford Tigers and Bradford Bulls or York City Knights look set for their opening win of the season when they meet at Odsal.