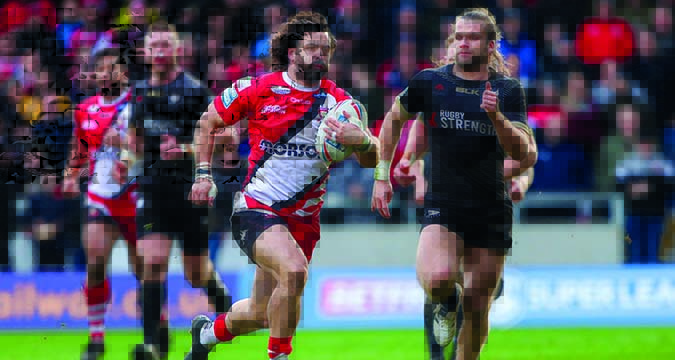 Rhys Williams seems to have been around in Rugby League forever, but it was the 15-a-side code where the flying winger first began his sporting career.

That was, until Warrington came calling for the second time.

“Paul Cullen and Peter Farrell and Warrington tried to get me to go to League when I was 13/14, but at the time I was enjoying Union,” says Williams.

“At 18, I got released from Scarlets Rugby Union and through Paul Cullen I got a trial at Warrington and that’s how I ended up there.”

It wasn’t always easy for Williams to get game time at the Halliwell Jones Stadium, so loan spells at Crusaders, Castleford, Salford and Swinton helped the Welshman get where he is today.

“Each loan had its positives; the chance to play Super League and get valuable game time was great,” he adds.

“Looking back, I wish I would have stayed at one of the clubs I was on loan at for a full season instead of just a month or two to get a real grip of what it’s like, week to week for a full season.”

Finally, Williams got an extended shot in the first team at his next destination, London Broncos. It was an experience that the winger could not speak more highly about, particularly with how he was able to bond with his fellow peers.

“I loved my time with the Broncos; we all lived in one area so the social side was really good.

“We would all go for coffee and play cards every day and enjoyed a pint together after playing.

“The high of getting promoted and showing we deserved to be in Super League with ten wins was great, but getting relegated was heartbreaking.

“Overall, though, I’ve got great memories and I worked with some great people.”

Williams’ performances in the capital earned him other top-flight suitors, including 2019 Grand Finalists Salford. And, in just his first season, Williams reached the Challenge Cup Final with the Red Devils.

“Obviously, to get to the final was great, but it doesn’t mean anything unless you win,” he contends.

“The club has made two finals now, so a lot of lessons can be learnt from them, but my goal for this season is just to be more consistent again and do whatever I can to help the team.”

With the World Cup at the end of the year, Williams is likely to be included in the Welsh squad and after earning 30 caps for the Dragons and he can’t wait to pull on the red jersey once again.

“I’m very much looking forward to the World Cup and I’d be lying if I said I wasn’t going after a record number of caps for Wales.

“I’ve missed playing for my country in the past two years, so I just can’t wait to meet up with the lads and get going again.”