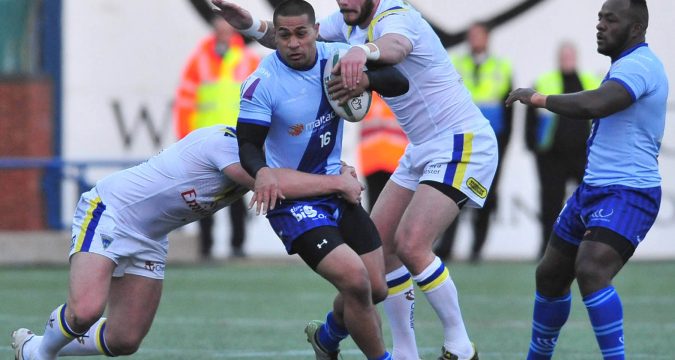 Widnes Vikings have continued their recruitment and planning for 2015 with the news forward Willie Isa has signed a new two-year contract with the club.

Isa, 25, becomes the ninth player to sign new terms with the Vikings as Widnes boss Denis Betts stepped his recruitment and retention drive up again this week.

And the big Kiwi-Samoan, who has successfully completed the transition from the outside backs to the forward pack at Widnes, says he’s pleased to put pen to paper on a new contract that will see him at the Select Security Stadium for Super League seasons 2015 and 2016.

“I’m really excited about the future at Widnes,” the former Melbourne and Castleford star said. “I’m really enjoying my footy here – it’s a great Club and one which is on a real upward curve.

“We’ve got a great bunch of players here and we are all committed to getting the Club back to where it should be, and that’s right at the top of the game.

“The supporters have been great with me too and I’m enjoying the work off the field in the community. It’s just a good time to be involved as we really look to get to the next level this year.”

Vikings Head Coach Denis Betts says Isa is a big part of the Club’s future, and is delighted to get another key member of his squad tied down for the next two seasons.

He said: “I’m really pleased Willie has signed. I’ve been impressed with his contribution to our unit this year. He’s come off the wing/centre and into the forward pack, essentially like a loose-forward, and he’s done a tremendous job.

“His energy and enthusiasm around the place is really infectious and you can see that by the way he plays the game.  He’s really committed and the way he lives his life off the field is the way he lives it on it and he’s a real pro. He wants to be the best he can be and he’s a great personality at the Vikings and we are pleased to have him here in our environment.”