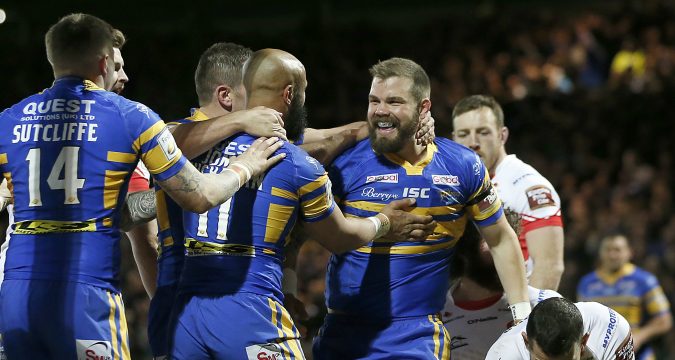 Winner: Leeds Rhinos
The Rhinos made a fairly convincing start to life in the Qualifiers on Saturday, thrashing Featherstone 62-6 to lay down a firm marker about any chances of being dragged into a relegation battle. With a huge clash against fellow opening-weekend winners Hull KR to come on Friday, victory there would set Leeds up nicely for a top-three finish, with their big names slowly getting back to their very best.

Loser: Huddersfield Giants
The pressure is suddenly on Rick Stone’s men in a big way in the Qualifiers. A seven-game campaign means early defeats put teams under the pump early on, and defeat to Salford now makes Sunday’s game against Featherstone nothing less than must-win. If they succumb to a shock there, the Giants are in real relegation trouble.

Winner: Sheffield Eagles
It’s been a difficult year for Mark Aston’s men, but victory at Halifax on Sunday did two things. The first – and arguably most important – was getting them two points further away from the relegation zone, but it also puts them in a strong position when it comes to the hunt for the Championship Shield. Ending the season with silverware would certainly have to be regarded as a successful one of sorts for the Eagles after such a horrid start to 2016.

Loser: Wakefield Trinity Wildcats
Thrashed at Wigan and now 10 points adrift of the top four with just 12 left to play for, there is a danger Wakefield’s season could begin to fade fairly quickly. Chris Chester will be determined to not let that happen, but with Warrington next up on Sunday, an injury-hit Wakefield side need bodies back quickly to compete with the league’s best, you fear.

Winner: Wigan Warriors
Defeats for Warrington and Hull put the other side in the leading trio, Wigan, in pole position for the League Leader’s Shield again over the weekend. Their hammering of Wakefield moved them level on points with Hull FC at the top ahead of a tricky trip to Castleford on Friday.

Loser: The Cumbrian clubs
The gap is four points to third-bottom Swinton for both Workington and Whitehaven: who are looking to avoid what would be a disastrous year for Cumbrian Rugby League if they were both relegated to the third tier together. Can either or both of them fight their way out of trouble in the remaining six games?