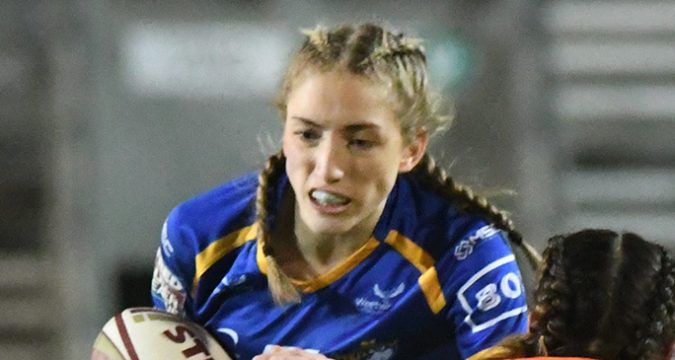 Leeds Rhinos and England fullback Caitlin Beevers has said the 18-month lay-off between Super League seasons will add an extra layer of excitement to this year’s competition.

The new season will kick-off on Sunday, April 18, with ten teams launching the quest to reach the Grand Final on Sunday October 10.

With the Coronavirus pandemic halting the entire game a week before the 2020 Women’s competition was due to kick off, there has been no competitive league action for the players since Leeds Rhinos beat Castleford Tigers in the Grand Final back in October 2019.

The Rhinos will launch their defence of that title against York City Knights and Beevers is relishing the challenge.

“It’s been a long 18 months,” said Beevers, who returned to training with her Rhinos team-mates last week.

“Everyone was really excited to be back on Tuesday. We’ve all worked hard during lockdown and you could really see that in the fitness tests we were given.

“That was really positive to see and if we keep going with that attitude all season, it will be a great competition.

“I’m just really excited to get out there again now and see what the girls can do.

“Every team has developed during lockdown and it will be good to see how much fitter and stronger everyone else is after the lockdown.

“The amount of talent that is coming through now is unbelievable. You have young players coming through that have been playing from a young age, so the skill level is already there to build on.

“All teams have recruited really well too. Saints in particular have some fantastic recruits, so they are definitely going to be a force to be reckoned with this year, even more so than in 2019.

“It’s going to be totally different competition this year and that’s where the excitement is for me. We’re going into the unknown and we can go out and make our own impression again.”

While Super League clubs have just returned to training, the England squad has been enjoying sessions in preparation for the World Cup throughout the winter.

The return of Super League will further aid England’s preparations, and Beevers believes a competitive club season will put the national side in a strong position come autumn.

“It wasn’t possible to wait until now, with the season set to restart, to start preparing for the World Cup so we have been training frequently,” added Beevers.

“Ahead of the World Cup it’s massive that we’ll be getting a full season played this year.

“We need to get some games under our belts to see where we are. It’s okay training regularly but we need to put that in a game situation and playing every week is going to do that and help us keep us improving everything we need to.

“The Super League is a really important part of England set up.

“We’ve been training really hard and we feel fit and ready, but we need to play.

“We probably don’t realise that we are a bit behind with not having played, but once we’re back we’ll really start getting into our stride.

“Every game we play will make each of us better and if we carry on building ourselves up as we are, then we will have every chance of winning the World Cup.”

The first ten rounds of the season will be played behind closed doors at two central venues – Victoria Park in Warrington, and Sports Park, Weetwood in Leeds.

The top four teams at that point will qualify for the play-offs, starting in August, when it is hoped crowds will be allowed, with the teams playing each other home and away for an additional six rounds of fixtures, at which point the top two qualify for the Betfred Women’s Super League Grand Final.

The other six teams will play each other once in a Shield competition, with the top four in that mini-table qualifying for Shield semi finals leading to a Shield Final.

The full fixture list for the Betfred Women’s Super League 2021, the venue for the Grand Final, and the schedule for the Betfred Women’s Challenge Cup, will be published shortly as well as further details of Our League coverage of the competition. The Women’s Championship and League 1 return as grassroots Rugby League alongside the girls’ competitions, with training due to commence from Monday 29 March.