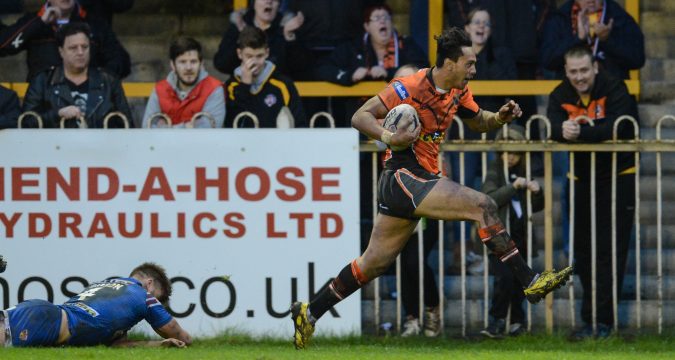 The RFL’s chief executive Nigel Wood has admitted Denny Solomona being allowed to walk away from rugby league to cross codes without any repurcussions could have “profound potential implications” for the sport.

On Wednesday, Solomona’s long-protracted move to Sale inched closer when the 23-year-old was included in Sale’s squad for the Champions Cup: despite the Sharks still not officially announcing him as their players yet. It is understood, however, that Sale could announce Solomona’s signing within the next seven days.

League Express revealed on Monday how Solomona had been granted a work permit for his move to Sale – as well as the news that the sport’s governing body had sought out talks with both the RFU and Premiership Rugby to try and amicably bring the drama to a conclusion.

Yet TotalRL understands that with nobody willing to budge, a long legal battle could now ensure – which could run well into next year; during which time, Solomona would be free to play rugby union with Sale.

And Wood admitted at a media briefing on Wednesday that it is a significant case for rugby league to try and get right as Castleford prepare to enter the courts.

“It’s a concern for more than just the game,” he said. “There’s got to be some form of process when you enter a contract with people where they have to be respected. Walking away from something is not to be condoned, whether it’s players moving in or out of rugby league.

“It’s a Castleford issue but clearly, as we said last week, the sanctity of contracts have to be respected. Castleford will be making their position public over the next couple of days but I expect them to defend their position vigorously.”

“We’ve been in contact with both the RFU and Premiership Rugby, and they are certainly aware of our position. This is potentially bigger than rugby league and rugby union; it’s a law of the land issue potentially. It would be inappropriate to speculate on things as there’s ongoing legal action, but obviously a contract exists and Castleford have not agreed to release him. It’s got profound potential implications for the whole of the sport.”

Wood also drew comparisons to Sonny Bill Williams’ move to rugby union in 2008 when, after a lengthy legal battle, Canterbury Bulldogs were awarded a fee for his move to Toulon.

“There was a case almost 20 years ago when a player went back to Australia and got out of a contract, but that was staying within rugby league, but the big comparison is Sonny Bill Williams leaving Canterbury to play for Toulon – and eventually, when everyone sorted things out, there was a significant comparison payment.”

And Wood defended the RFL’s contract situation, despite a number of players attempting to walk away from their existing deals with Super League clubs: including Solomona.

He siad: “I’m not sure our contacts are weak; the standard RFL contract is relatively clear and in any event of something like this happening, it would always be referred to the law of the land, as there’s nothing uncertain about Denny Solomona’s contract with Castleford.”