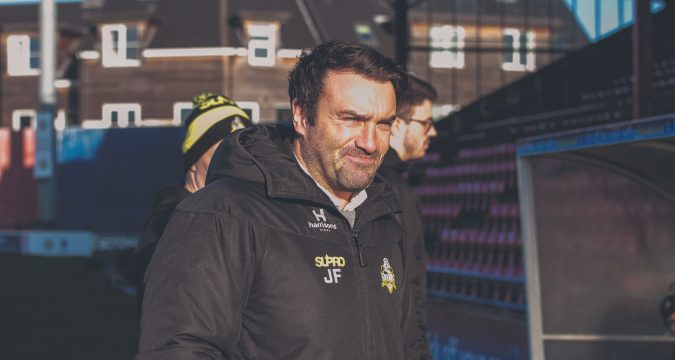 James Ford disagrees with people who say the promoted Championship club is being set up to fail.

The York City Knights head coach is waiting with optimism that he will be a Super League coach next season, with the Knights one of six clubs vying for the vacant twelfth place in Super League.

Whichever club does get promoted does face an unenviable task. They will receive just £1 million in central funding, compared to around £1.5m Super League clubs will receive after rebates, they’ll enter a transfer market in which other clubs with more money are also competing in, and they enter it late, when many of the sought-after talents are already signed up.

Ford, however, believes that the opportunities outweigh the challenges.

For starters, he believes that his squad has more than enough quality to be competitive in its own right, with the squad at his disposal similar to the side that finished third in 2019, with the likes of Danny Kirmond and Ryan Atkins added on top of that. London Broncos, who were given no hope of survival after retaining the majority of their promotion squad, surprised everyone and were only relegated on the final day of the 2019 season.

“We have a number of players who have shown over their careers that they are good Super League players, they’ve won team and individual awards,” Ford said.

“But there’s an awful lot of quality in the Championship too. Yes, there is a step up, mainly inconsistency. You get high-quality moments in Championship, but the difference is there are less medium and low-quality elements. Are we going to step up and win Super League? I’d be surprised if that’s the case. Would every team going up have a tough day at the office now and again? Absolutely, but we saw Leeds get peppered against St Helens and then they won the Challenge Cup.

“We also have younger players who have played 10 to 15 games at Super League level and have filtered down to the Championship and are now better players. I don’t think anybody would argue that those players would improve from going full-time again, and we would go full-time.

“We have other players that we’ve picked up from untapped places, such as Marcus Stock and Jason Bass, and their trajectory is so exciting, they’ve come from clubs at the bottom end of League 1 and are now competing at top-end of Championship and going full-time would allow them to kick on and improve.”

That doesn’t mean the Knights wouldn’t recruit. Far from it. If successful, York would hold the most quota places of any Super League club, with five overseas spots at their disposal. The club has been proactive and already held conversations with a number of agents and players from both hemispheres.

“The question is not being able to pick up the quality, I’ve no doubt about that, but getting the right mix of on-field qualities and personalities and getting that balance right would be the biggest challenge, but the talent is out there in abundance. I’ve been surprised with some of the names thrown up.

“It’s a great market to be buying in. There’s also, dare I say, positives for us in that the NRL reserves and the NSW Cup might not run and an abundance of talent will then be looking for an opportunity.”

York are currently part-time and if they were to move full-time, there is a threat some players couldn’t commit.

But Ford says the club’s long-term recruitment strategy would minimise those issues.

“One of the things we look for is the drive and ambition to kick on at the highest level, we have a number of players who have historically stayed at York when they could have got money elsewhere because of their ambition to become a Super League player, so I don’t see why that would change if the opportunity presented itself. It’s an opportunity to show what they can do it and going full-time would remove a barrier.”

Ford is under no illusions that Super League would provide a stack of challenges. But he’s not daunted by them, either.

“I want to challenge myself in Super League, if I’m fortunate enough to be asked to do that at York I would love to.

“I’d be excited by the challenge, for sure. You don’t get opportunities like that too often. I saw Steve McNamara say most coaches will only get the opportunity of winning 20 trophies in their coaching career, you don’t get a trophy for staying up but it would be a huge achievement keeping a club up on one million quid.

“But in context, £1m for us compared to the rest, it’s the closest we’ve been to a level playing field in years. Look at the disparity between us and our League 1 rivals and the Championship too, and we’ve succeeded in both those competitions when the gulf in funding has been much wider.”