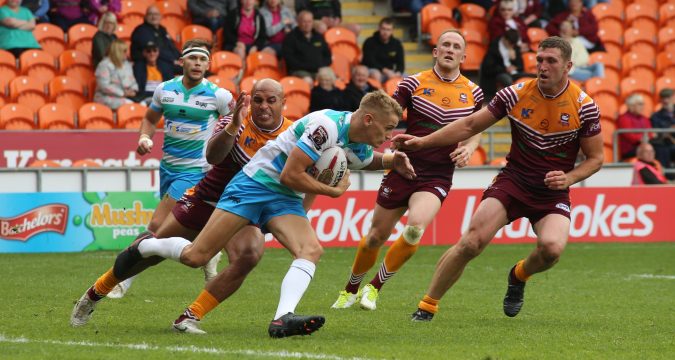 Wakefield coach Chris Chester has admitted youngster Luke Hooley is in contention to play a prominent role in the club’s pre-season plans, and perhaps even their season, after revealing the youngster has been “training the house down” in recent weeks.

The 19-year-old has not even made a senior appearance for Trinity’s first-team yet, and only played six times on dual-registration with Dewsbury in 2017.

However, Chester told League Express he has been pleasantly surprised with how Hooley has begun pre-season – admitting he is in pole position to start the Boxing Day friendly against Leeds at fullback, giving him an early chance to stake his claim for a regular place in the side.

Chester said: “Everyone has come back in really good shape, but it’s nice to see Luke train the house down.

“Luke is really snapping at Max Jowitt’s heels in terms of playing fullback on Boxing Day. I’ve still not made my mind up about the team – and I won’t do until a few days before – but we’ll play a strong side, and Luke is part of my thinking for that now.

“It’s been great to see him kick on in pre-season.”

With Scott Grix, Jowitt and now Hooley in contention for one position ahead of the 2018 season, Chester insists that is symptomatic of the depth he has throughout his squad.

And he said he feels he has the strongest squad he has ever seen as a head coach.

“There’s so, so much competition – and that can only be a good thing,” he said.

“Look at the centre spot, there’s three or four guys vying for one position there. Tom Johsntone, Mason Caton-Brown and Ben Jones-Bishop are hunting two wing spots, there’s the three lads pushing for fullback and then there’s the pack – I think it’s the best I’ve been involved with.

“I’ve been involved with some great squads in terms of quality, but for depth, this is very healthy. You’re not hitting squad numbers in the late 20s until you’re getting to the really young lads, and that depth which so often gets you out of trouble is something which I’m pleased with.”

Meanwhile, Chester also shed light on when prop David Fifita – whose wife has been jailed in Australia – is likely to return.

“We’re looking at Dave coming back between Christmas and New Year,” he said.

“Aside from him, almost everyone is back though, and that’s pretty unheard of at this time of the year. We’ll have a good solid three or four weeks together as a group building up to the first friendly.”