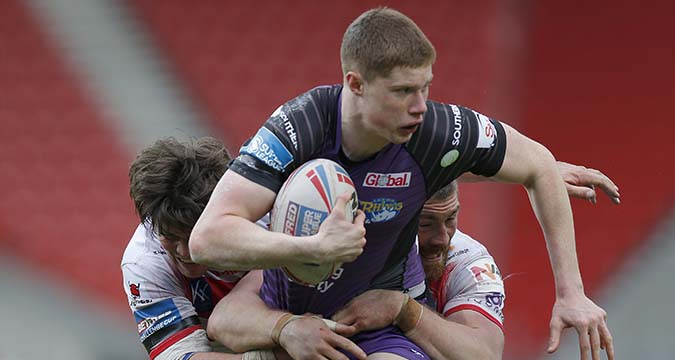 Rising Leeds star Morgan Gannon is hoping to get the chance to erase a few painful memories from his debut earlier this season when the Rhinos host St Helens on Friday.

The 17-year-old Academy second rower was among the replacements when the injury-hit Rhinos went down 26-18 to Saints in the third round of the Challenge Cup in April.

That defeat meant the holders fell at the first hurdle in their defence of the famous old trophy, and was the second in a run of five straight losses.

Leeds have bounced back to win two of their last three games, however, and Gannon scored his first senior try as Castleford were crushed 60-4 at the Mend-A-Hose Jungle last time out.

That was a fifth appearance for the Siddal product, who was also given a run-out during the pre-season game at Huddersfield.

“The Castleford match was the first time I had played more than 20 minutes straight, and I really enjoyed it,” he said.

“Getting the try was great. I saw the ball go up in the air, and once I got hold of it, I wasn’t going to let anyone stop me!

“I thought it was a great team effort, and when everyone else around you is playing so well, it makes it easier.

“The win gave everyone a lift, and the atmosphere at the training sessions since has been good, but we know we have to build on it.”

Gannon, who can also play loose-forward, added: “At the start of the year, I never expected to be playing as much as I have been.

“My main goal was to play my first game and since then I’ve wanted to get picked as frequently as possible, but I just take it week by week.

“I’m trying not to look at things in the long term but just try and keep getting in the team as much as possible.”